News reports that Pope Francis supported civil unions as a compromise strategy when he was archbishop in Argentina have given hope to LGBT-affirming Catholics that he may be a pope who will be willing to soften the hard line that the Vatican has taken on the issue of marriage equality and same-gender relationships under the papacies of John Paul II and Benedict XVI.

If Pope Francis does institute the same policy as pope that he promoted in Argentina,  he will be in good company with other bishops around the globe on this matter.  As Bondings 2.0 has been reporting over the last year or so,  there has been a growing trend of more openness to same-gender relationships, including civil union support, by a number of bishops and church leader from various nations.

Bondings 2.0 has been taking note of this trend since December 2011, when Archbishop Vincent Nichols, president of the bishops’ conference of England and Wales, supported the idea of civil unions in the United Kingdom’s marriage equality debate.   At about the same time, Fr. Frank Brennan, a Jesuit law professor in Australia, wrote an essay supporting the idea of civil unions, too.  Just last month, the bishops of England and Wales, in commenting on the marriage bill there, praised same-gender parents:

“We recognise that many same sex couples raise children in loving and caring homes.”

“When two people, even if they’re the same sex, decide to live together, it’s important for the State to recognize this fact. But it must be called something different from marriage.”

Just over a year later, he was joined by Bishop Giuseppe Fiorini Morosini, in nearby Calabria, Italy, who supported legal protections for gay and lesbian couples, as long as the word “marriage” wasn’t used.

In the United States, the Diocese of Manchester, New Hampshire, supported a civil unions bill in March 2012, as a way to forestall marriage equality.   In their statement, the diocese said:

“The Diocese of Manchester consistently has opposed legislation that would establish civil unions. However, the proposed amendment to HB 437 falls into a category of legislation which the US Bishops have previously considered: bills in civil law which may not reflect the fullness of the Church’s teaching, but which nonetheless provide an “incremental improvement” in the current law and a “step toward full restoration of justice.” (USCCB, Forming Consciences for Faithful Citizenship, 32)”

Most recently, Archbishop Vincent Paglia, head of the Vatican’s Pontifical Council for the Family, also supported legal protections short of marriage for gay and lesbian couples.  A news report stated:

“In his first Vatican press conference since his appointment as the Catholic church’s “minister” for family, Paglia conceded that there are several kinds of ‘cohabitation forms that do not constitute a family,’ and that their number is growing.

“Paglia suggested that nations could find ‘private law solutions’ to help individuals who live in non-matrimonial relations, ‘to prevent injustice and make their life easier.’ “

Though some claim that Paglia later backtracked from these statements, it seems that his later comments were simply a criticism of news reports which tried to make it sound like he had supported marriage equality, which it was clear he had not done.

Related to this trend of supporting civil unions as a political strategy is a newer trend by some bishops in speaking positively about gay and lesbian relationships.   This recent trend began in May 2012 when Cardinal Rainer Maria Woelki of Berlin, Germany, addressed a national gathering of Catholics, stating:

“When two homosexuals take responsibility for one another, if they deal with each other in a faithful and long-term way, then you have to see it in the same way as heterosexual relationships.”

Woelki re-affirmed his position in an interview with Die Zeit magazine, in which he stated:

“ ‘Every sign of unjust discrimination in their regard should be avoided,’ the Catechism says about people with homosexual tendencies. If I take that seriously, I can’t merely see homosexual relationships as a ‘violation of natural law,’ as the Catechism puts it. I should also try to perceive it as people permanently taking  responsibility for one another, being loyal and willing to take care of each other, even if I can’t agree with such a lifestyle.”

Early in 2013,  the French bishops conference went public with a statement opposing marriage equality, but which spoke very favorably of gay and lesbian relationships.  For example, they stated:

“The diversity of homosexual practices must not hinder us from taking seriously the aspirations of those men and women who wish to engage in a stable bond. . . .

“The Catholic Church calls the faithful to live such a relationship in chastity but she recognizes, beyond the one sexual aspect, the value of solidarity, of the attention and care of the other which can manifest itself in a lasting affective relationship.”

You can read relevant excerpts from this document provided in English translation here, thanks to Bondings 2.0 reader Tom Luce. 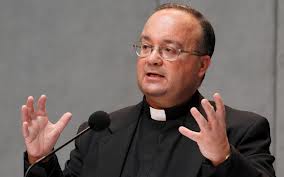 Bishop Charles Scicluna of Malta spoke in a similar vein about same gender relationships in February 2012. The bishop made his remarks in response to an anti-gay letter written to him by a Mr. Joe Zammit:

“Bishop Scicluna maintained that ‘Gay people are not called to marriage which is the permanent union between one man and one woman open to the gift of parenthood,’ but then added, ‘they are indeed called to chaste friendship and chaste friendship is chaste love.’

“ ‘To say, as Mr Zammit keeps harping, that “there can never be love but only lust between homosexuals” is to deny the truth of what the Church teaches.’ . . .

You can find a video of Bishop Scicluna’s comments here.

All of  these items indicate a definite trend toward a more positive approach on same-gender marriage that is percolating among the hierarchy.  Although none oppose the traditional teaching on marriage, these moves indicate a willingness to move away from harsh rhetoric, as well as looking for ways to accommodate legal protections for families headed by same-gender couples.

The recent report that Cardinal Bergoglio had supported civil unions can offer some hope that now as pope he will do the same.  I would be more hope-filled if his statements reflected some of the more positive messages that some of the bishops reported on above had made about the goodness of gay and lesbian relationships.  The report of his proposed compromise makes me wonder if he was motivated by political pragmatism in an effort to prevent marriage equality or a moral duty to protect lesbian and gay couples.  I think the hope for the future may be in the fact that the trend among bishops for a  more positive framing of lesbian and gay relationships will flourish more openly under a pope who, for whatever reason, has already been willing to drop the traditional hard line.