The recent marriage equality debate in Illinois produced a lot of important arguments, especially from Catholics who supported the passage of the new law. For instance, as we noted a few weeks back, several Catholic legislators appealed to Pope Francis’ famous “Who am I to judge?” comment to support their endorsement of marriage equality.

In an op-ed essay in The Chicago Sun-Times, Cristina Traina, a Northwestern University  professor of religious studies and scholar of Catholic ethics builds on the idea of papal thinking as an avenue to support marriage equality.

Entitled “Unnecessary roughing: Why Catholic bishops should be more accepting of gay marriage,”  Traina argues that Catholics, because of their moral tradition, should not only accept, but actively work for marriage equality.  This imperative, she asserts, comes not only from Pope Francis, but from his more conservative-minded predecessor, Pope Benedict XVI.  She explains:

“Pope Francis certainly has not promoted same-sex marriage — especially in the Church. But he and his predecessor, Benedict XVI, both have made arguments that suggest their willingness to distinguish the low bar of public policy and civil law from the high bar of Christian moral ideals. Most importantly, they and others in the Catholic hierarchy seem to see these laws and policies as means of nudging people toward spiritual and moral renewal.” 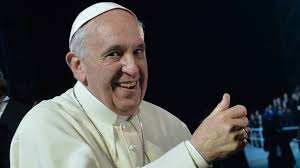 Traina leads her readers carefully through the confusing realm of what she calls “Vatican-speak” to explain how she arrived at this conclusion.  For example, Pope Francis’ Vatican has already recognized that same-sex marriage is a phenomenon that needs to be approached in a new pastoral way.  Noting that the Vatican is polling Catholics worldwide what their thoughts on same-sex marriage are,  Traina states:

“With the clear assumption that same-sex marriage is a cultural reality, the poll is trying to determine how the Church should minister to gay and lesbian couples and their families.”

From this point, she goes even further, by bringing in the sophisticated moral reasoning that Pope Benedict used when discussing condom use:

“The last example brings us to Pope Benedict XVI, who in 2010, according to an explosion of newswires, reversed Catholic teaching, cautiously approving the use of condoms to reduce transmission of HIV/AIDS. What the pope actually said — as the Vatican quickly confirmed — was quite different but no less important.

“He argued that for a person who has been practicing unprotected sex, using condoms out of concern for others ‘can be a first step in the direction of moralization, a first assumption of responsibility, on the way toward recovering an awareness that not everything is allowed and that one cannot do whatever one wants.’

“Though the Church disapproves of condoms, the reasoning goes, using them for the right reasons might lead a person gradually toward greater moral concern and away from a self-indulgent approach to sex.

“The implication is that the Vatican is beginning to view ‘irregular’ behavior like condom use and same-sex marriage as opportunity rather than as threat. Without abandoning its rejection of either, it shows signs of seeing both as indications of people’s aspirations to love, fidelity and concern for others — as nascent yearnings toward a holy life.”

This style of reasoning offers the U.S. bishops an example of how they can acknowledge and support marriage equality:

“Pope Benedict acknowledged the integrity of people who want to use condoms to forestall the spread of an often-fatal disease, though the Catholic Church teaches that sex should be confined to marriage and that monogamy and abstinence are better protection than condoms against HIV/AIDS. American bishops could follow suit by acknowledging the integrity of same-sex couples who want to marry, declare their fidelity, and raise children together, though the Catholic Church teaches that marriage should be confined to heterosexual couples.”

Traina concludes with a hope for the future:

“The implication of the popes’ actions is clear: marriage equality could be an important stepping stone to a holy life and therefore just might be good law.”