Two bishops from opposite ends of our wide nation discussed marriage equality recently, and it’s interesting to note the different tones that each took in regard to this sometimes contentious Catholic issue.

Bishop Larry Silva of the Diocese of Honolulu, Hawaii, made headlines by publishing an open letter to Catholics stating that opposing marriage equality is a “just” form of discrimination.  He wrote the letter after the governor announced that it was very likely that he would be a convening  a special legislative session to discuss a marriage equality proposal.

“People with same-sex attraction are a part of our community, even our Catholic community, and they deserve dignity and respect. Unjust discrimination against them is not acceptable. However, not all discrimination – that is, making distinctions – is unjust. . . .

“To discriminate between heterosexual and same-sex couples regarding marriage is not, despite the hype on the streets, unjust discrimination.”

Surprisingly, the quotations above are not the worst part of Silva’s letter.  The worst parts, in my view, are when he speculates about the dangers that marriage for lesbian and gay couples might bring to society:

“If same-sex couples are given the legal right to marry under the pretence that discrimination that excludes them from marriage is unjust, why would people who prefer several spouses at the same time not be afforded the same right? Why would we taxpayers be exempt from paying for marital benefits for all those spouses? Why would there be discrimination against those who decide to marry their mother or father, brother or sister, so that they can gain spousal benefits for them? Once
we give in to the false notion that same-sex couples have a right to marry, how can we reasonably deny the same ‘right’ to anyone who chooses to enter a ‘marriage’ with a close relative, a minor (with consent)?

“If same-sex marriage becomes ‘norm’-alized, would parents be considered bigoted if they raised their daughters to be attracted to boys and their sons to be attracted to girls? Or must parents now be completely neutral in steering their children toward the choice of a mate?”

Polygamy and incest are natural results of same-sex marriage?  I think not.  Such speculation is ludicrous.   More ludicrous, however, is the second paragraph quoted above.  Does the bishop really think that parents can influence how a person’s sexual orientation develops or that they can decide on a marital mate for their son or daughter?  If that is his impression, he certainly needs more than a few lessons in parenting, sexuality, and relationships. 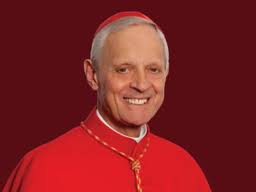 On the complete other side of the nation, Cardinal Donald Wuerl of the Archdiocese of Washington, DC, recently wrote a blog post about marriage entitled “Caring For Those Who Disagree with Us on the Meaning of Marriage.”  His essay, however, does not fulfill the promise of its title (he never talks about how to relate to people who support marriage equality).  As might be expected, like Bishop Silva, Wuerl opposes marriage for lesbian and gay couples.   While his tone is somewhat more pastoral, Cardinal Wuerl’s post also contains some errors.  In one paragraph he states:

“The conflict usually arises when some insist that the Church change her teaching.  What is meant is that the Church should sanction and even bless homosexual activity as normative.  This the Church can no more do than it can sanction and bless heterosexual activity outside of marriage.  Regardless of sexual preference, those who are unmarried are called to a chaste life (Catechism of the Catholic Church, 2359).  However, neither can the Church give assent to so-called ‘same-sex marriage.’ ”

As I’ve mentioned before, none of the marriage equality laws enacted in the U.S. have insisted that any church change its teaching about marriage.  None of these laws have asked any religious institution to bless gay and lesbian couples.

Wuerl also claims that people have a view of marriage which coincides with his own:

“We all recognize that the word ‘marriage is now being used in many different ways.  All that civil government can do is address the legal consequences of any specific union it has chosen to call marriage.  But marriage itself will continue to be understood by most people as the coming together of a man and woman committed to living together with the possibility to generate and raise children. “

Clearly, his last sentence is not true.  Ask any of the thousands of legally married same-sex couples and the majority of Americans who favor marriage equality if Wuerl’s definition of marriage matches with theirs.  The answer is that it doesn’t.  Even before marriage equality became an issue, there were many different definitions of marriage present in society.  Not even all religions agree on one definition.

Unlike, Silva, however, Wuerl seems more inclined to see this issue as a pastoral one, not just a political one.  In one paragraph, Wuerl states:

“We are followers of Jesus Christ, so our message must be what he proclaimed.  The teaching of the Church is one of equality.  The Church does not propose different standards of sexual morality depending upon sexual inclination.  Instead, Catholic teaching on homosexuality is the same as it is for all, which is to love God and love one another in truth (Matthew 22:36-40; Ephesians 4:15; Philippians 1:27; cf. Gaudium et Spes, 24; Caritas in Veritate, 1-2; Familiaris Consortio, 11 et seq.). Thus, it is simply false for anyone to accuse the Church of discrimination, bigotry, or hate speech when it comes to those with a same-sex attraction.  Instead, the Church welcomes and embraces them. “

While I think Wuerl is sincere in his welcome, I don’t think he is aware that because of statements from people like Silva, many LGBT people do not feel welcomed by the Catholic church.  I think this makes it more incumbent on pro-LGBT Catholics to be even more welcoming in their relationships with LGBT people.

One last detail from Wuerl’s piece.  Although he doesn’t say it by name, he seems to indicate an openness to civil unions or domestic partnerships:

“Unions of people who choose to live together for any number of reasons are one thing and these might even be sanctioned with civil effects that provide for everyone in the union.”

Both bishops would benefit greatly by talking and listening to lesbian and gay couples and single people to learn more about the reality of their lives.  Such sessions would help them avoid the errors they have made in discussing marriage equality.

PinkNews:  Bishop of Honolulu: Equal marriage could lead to polygamy and incest