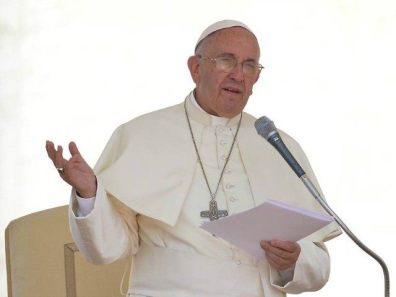 Should the pope be political and/or partisan or not? Pope Francis’ trip to Mexico raised these questions after he challenged whether Donald Trump could be considered Christian. The question also bears on LGBT issues, particularly in Italy where legislators are debating the legalization of civil unions.

Pope Francis gave an in-flight interview returning from Mexico, as he regularly does when apostolic journeys conclude. When asked about the civil unions issue in Italy by Il Sole 24’s Carlo Marroni, the pope responded:

“First of all, I don’t know how things stand in the thinking of the Italian parliament. The Pope doesn’t get mixed up in Italian politics. At the first meeting I had with the (Italian) bishops in May 2013, one of the three things I said was: with the Italian government you’re on your own. Because the pope is for everybody and he can’t insert himself in the specific internal politics of a country. This is not the role of the pope, right? And what I think is what the Church thinks and has said so often – because this is not the first country to have this experience, there are so many – I think what the Church has always said about this.”

From this answer, one would believe the pope refrains from partisan engagement over specific policy questions, and this would include legal recognition of same-gender couples in Italy. But Francis’ record is not so clear. Here are a few relevant facts to consider.

First, in Italy, he has refrained from explicitly condemning civil unions or using the church’s influence to lean on Catholic politicians. This approach directly refutes some Italian bishops’ highly partisan campaigning and is notably different from his predecessors, said theologian Massimo Faggioli. But speaking to the Roman Rota in January, Pope Francis offered his strongest criticism yet of marriage equality saying “there can be no confusion between the family as willed by God, and every other type of union.” This was seen by some observers as a comment on Italy’s civil union debate.

Second, Pope Francis has commented on the “specific internal politics of a country” at least twice before when it comes to LGBT rights. In Slovenia in December 2015, during the week of a national referendum which eventually banned marriage equality and adoption rights by same-gender couples, Pope Francis encouraged all Slovenians, especially those in public life, “to preserve the family” .  A similar moment happened in February 2015 when the pontiff exhorted pilgrims from Slovakia to “continue their efforts in defense of the family,”  just days before an unsuccessful referendum in that nation against equal marriage and adoption rights.

Third, Pope Francis often speaks through gestures, actions, or the statements of his surrogates. For instance, this week, in the midst of the Italian civil unions debate, Vatican Secretary of State Cardinal Pietro Parolin said it was “essential” that Italian law differentiate between civil unions for same-gender couples and marriage for heterosexual couples.

It helps to remember, too, that Pope Francis is a solitary person shepherding 1.3 billion people, and that his voice can be used and misused, making it hard to know at times what comes from Francis and what comes from contrary parties.

Fourth, and finally, when called upon to be a voice for marginalized LGBT people, Pope Francis has remained silent. Advocates pleaded with him to speak against laws criminalizing homosexuality during his apostolic voyage to Kenya, Nigeria, and the Central African Republic last fall. Advocates have asked him to intervene in the Dominican Republic, where a cardinal has repeatedly used anti-gay slurs against U.S. Ambassador James Brewster. Last week, this blog commented that the case of Cameroon bishops calling for “zero tolerance” of homosexuality was a perfect case for papal intervention.

From my perspective, these facts suggest, despite the pope’s latest claim, the lack of a consistent position for Pope Francis when it comes to partisan involvement in a given nation’s politics. Pope Francis is, rightly I believe, a politically engaged pontiff and affirmed that to be human is to be political. But he has been partisan where it may be imprudent and even inappropriate for him to be so engaged. The damage U.S. bishops have done to the church in their country. because of their hyper-partisan agenda in recent years, is a cautionary tale. I speculate on two possibilities for why Pope Francis lacks a consistent position.

More negatively, it could be that he claims distance when convenient, and becoming more involved when similarly convenient. He chooses whether to speak about LGBT issues depending on whether he will obtain a positive reception from the audience. Could it be that Pope Francis changes not just the style, but the substance of his messaging depending on who is listening? That would be troubling.

More positively, maybe the humble Pope Francis is learning “on the job” as he navigates unprecedented reforms in a church that is now truly global and truly hurting. His inconsistencies arise because he admits to not having the answers and to shifting course when a better way forward appears apparent. Francis’ actions could reveal a leader who is willing to listen to others’ voices and to encounter those from different perspectives. That would be refreshing.