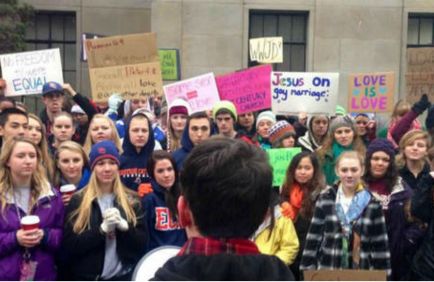 Are Catholic high schools supporting their LGBT students? That is the question behind a new article in U.S. Catholic analyzing the ways in which church-sponsored education does, or more likely does not, assist vulnerable LGBT youth.

Those in Catholic education generally agree the church needs “a thoughtful approach to talking about Catholic teachings on sexuality” within a society which is increasingly accepting of diverse sexual and gender identities, wrote Reneé K. Gadoua, a free-lance writer investigating the topic. But unlike for public or private schools, no organization and department exists to ensure LGBT students’ needs are being met at parochial schools. A “best estimate” proposed by Gadoua is that only 18% of Catholic schools in the U.S. may have a gay-straight alliance.

Failing to more robustly ensure all students’ flourishing is tied to the hierarchy’s own ambivalence about LGBT pastoral care, the article suggested. That “built-in tension,” said campus minister Michael Maher, “contributes to a reluctance to talk about it” and effectively contributes to silence LGBT issues within most Catholic primary and secondary schools.

Educators’ reluctance or ambivalence is reinforced when LGBT supports are explicitly rejected by those in power. Sr. John Mary Fleming, executive director of the United States Conference of Catholic Bishops’ Secretariat for Education, does not believe in GSAs or other LGBT-focused supports. (It is not in the U.S. Catholic piece, but I would add that the dozens of church workers who have lost their jobs in recent years because of LGBT issues have had a chilling effect too.)

Thankfully, Maher said high school students more and more expect their Catholic schools to provide support and are making demands. He explained the many shifts that have taken place since the 2001 publication of his book, Being Gay and Lesbian in a Catholic High School:

” ‘When I began to study this, it was not on people’s radar at all. . .Now you have very young people who self-identify and expect support. . . They see it in the larger culture. They watched Glee. You have same-sex parents who expect to be welcomed in the community. That’s only going to increase with legal gay marriage.’ “

Even if few, there are positive responses from some institutions. Gadoua highlighted the efforts of a GSA at the Jesuit-sponsored Xavier High School in Manhattan. That group provides a safe space for LGBT and ally students to socialize and support one another, as well as hosting Ally Week in October and GLSEN’s National Day of Silence. Senior Andrew Perez said sexuality was discussed in religion classes, too, specifically in light of Pope Francis’ more welcoming style. He said being an ally in the group means, “you are actively practicing having open arms.”

Alexander Lavy, an openly gay physics teacher who advises the GSA at Xavier, said the group began after the high profile 2010 suicide of Rutgers University student Tyler Clementi. Anti-bullying education is a key component, but the GSA exists for the entire community to be “building not just tolerance, but love” and “to acknowledge that everyone’s feelings and experiences have value,” said Lavy.

LGBT supports have an evangelization component, too, said Heather Gossart, who directs special projects at the National Catholic Educational Association. Gossart told U.S. Catholic that “to not have these conversations is a failure to evangelize.”

Gossart’s assertion that Catholic education has “a lot of support and counseling” happening but “without a lot of fanfare” points to a big part of the problem in Catholic schools. Fanfare is needed to highlight supports so students can know their school is safe and accepting without having to seek such assurances from a trusted mentor in between classes. There is good evidence to back this multi-faceted approach, said GLSEN spokesperson Kari Hudnell:

” ‘We know from our research that GSAs, supportive educators, and comprehensive and inclusive antibullying policies have a direct influence on school climate.’ “

Gadoua profiled the experiences of “The Gay Catholic” blogger Aaron Ledesma to show just how important better LGBT supports in Catholic education could be. Ledesma said his school, Strake Jesuit College Preparatory in Houston, Texas, kept quiet about sexuality, and homosexuality “was completely avoided all together.” He added:

” ‘When you’re 13 and coming to terms with your sexuality, it’s terrifying. . .It doesn’t help to feel alone in that. Without GSAs or a campus counselor who can provide a safe haven, some of the LGBT community will feel lonely and scared’. . .

” ‘[Ledemsa and other Strake alumni who have since come out] all agreed that we might have come out sooner if there had been support and resources available to us. . .In my class of nearly 210 alone, there are at least seven openly gay men and two transgender women.’ “

Catholic higher education has led the church in ensuring LGBT students and allies feel welcomed and affirmed on campus, but it appears that Catholic high schools have not kept up. Words from a 2002 review of Maher’s book published in America seem sadly fitting today:

“The pious admonitions of the Catholic magisterium are being lost in a vast sea of homophobia.”

The vulnerability of LGBT youth is a crisis that should concern the People of God. These youth experience higher rates of bullying, harassment, and violence that translates into higher rates of self-injurious behavior and suicide. The church should be supportive of all youth on the most sacred path of coming to know oneself as God created. But it should make a special option for LGBT youth because their specific reality is a minority one that is still stigmatized by some. Coming to know one’s identity is a complex process, particularly in adolescence, and coming out as LGBT can be immensely difficult without love and affirmation. But this is a holy journey that Catholic education can and must support.

For LGBT Rights, Is Pope Francis a Partisan or Not? CAMPUS CHRONICLES: Transgender Digital Archive Opens at Holy Cross
Loading Comments...
%d bloggers like this:
Scroll to top