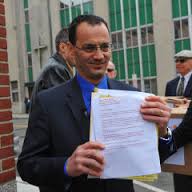 DignityUSA’s popular webinar series, “Queer Catholic Faith,” will feature an interview with Nicholas Coppola, on Tuesday, May 21, 2013,  9:00 p.m., Eastern Time.  Coppola, is the Catholic volunteer who was dismissed from several parish ministries when it was learned that he had legally married his husband in New York State.  Bondings 2.0 has been following Coppola’s story, and you can read the latest post about him here, and links to previous posts are at the end of this post.

The show’s host describes the upcoming program this way:

“A charismatic spirit, a deep call to serve, a love for his fellow parishioners and for his Church—these attributes only begin to describe Nick Coppola, recently fired from all ministry in his parish because he is married to a man. He’ll bring his abundant energy and faith to a live Queer Catholic Faith interview on Tuesday, May 21 at 9:00 PM Eastern. Tune in for free and from the comfort of home, and find out why this man still attends Mass at his parish every Sunday. Don’t delay. Register now and put it on your calendar. If you’re a straight or LGBTQ Catholic who’s a bit weary and worn of struggles to be counted with full dignity in the Church, this hour will give life.”

You can register for this webinar by clicking here.

May 15, 2013: Long Island Catholics Under Scrutiny for LGBT Support

May 2, 2013: EXCLUSIVE INTERVIEW: Nicholas Coppola In His Own Words