Two more nations in South America acted on marriage equality in the wake of legislative victories in Uruguay and Argentina.  Colombian legislators rejected equal marriage legislation in a heated vote, while a leading Brazilian court ruled to allow same-gender marriages and all of this occurs in the shadows of an impending trip to the continent by the first pope from South America this summer.

In a tense debate, the Colombian Congress rejected a marriage equality bill in a 51 to 17 vote which signaled a backlash to the growing acceptance of LGBT people in South America. Financial Times now reports couples seeking marriage licenses will need to register in the courts.

The legislation was prompted by a 2011 ruling from Colombia’s highest judiciary body, the Constitutional Court, that the Congress must enact equal marriage law within two years. Colombia has a dominant Catholic majority, many of whom vocally oppose pro-LGBT laws, however Cardinal Ruben Salazar is on the record endorsing civil unions as a form of legal protection for same-gender couples.

The National Council of Justice, a high-powered judiciary body in heavily Catholic Brazil, ruled the government may not deny marriage licenses to same-gender couples. However, The Telegraph reports this rule has deeper implications than just allowing the legislature to act:

“‘This is the equivalent of authorising same-sex marriage in Brazil,’ said Raquel Pereira de Castro Araujo, head of the human rights committee of the Brazilian bar association.

“Supreme Court Chief Justice Joaquim Barbosa explained that there was no reason for government marriage licensing offices to wait for Congress to pass a law on same-sex marriage before extending gays rights they legally already have.

“‘Are we going to require the approval of a new law by Congress to put into effect the ruling that already has been made by the Supreme Court? That would make no sense,’ he said in comments quoted by the G1 news website.”

Brazil is the largest Catholic nation worldwide, and the institutional Church there has not been friendly to LGBT rights. Bondings 2.0 reported earlier in May about a priest who was excommunicated for speaking out about inclusivity and welcome for sexual minorities. It appears conservative Catholic influences remain strong in the legislature too, and opponents of LGBT rights insist room remains for a challenge:

“In Congress, a strong religious faction opposes same-sex marriage, and has not yet approved a law on same-sex marriage regulations. And the NCJ’s decisions are subject to appeal before the Supreme Court…

“While some state courts have recognised same-sex marriages, the council’s ruling was the first to set out a national standard.”

In the interim, it appears Brazil will begin issuing marriage licenses to same-gender couples as it simultaneously prepares for the arrival of Pope Francis for World Youth Day this summer. 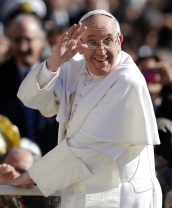 The effects of the new papacy on national hierarchies’ actions around pending marriage equality bills remains an open question, though Bondings 2.0 and others have mused about how he might act given his history of support for civil unions as a compromise. A piece in The National Catholic Reporter sheds further insights in terms of marriage. John Allen writes:

“On this score, I was told by three sources in Argentina that the [New York] Times basically got it right: Bergoglio did, in fact, favor civil unions…

“Guillermo Villarreal, a Catholic journalist in Argentina, said it was well known at the time that Bergoglio’s moderate position was opposed by [conservative bishops]…The difference was not over whether to oppose gay marriage, but how ferociously to do so and whether there was room for a compromise on civil unions…

“Behind the scenes, sources say Bergoglio tried to avoid fireworks on the gay marriage issue. One young Catholic told me, for instance, he had wanted to organize a public recitation of the rosary on the eve of the vote outside the legislature, knowing that supporters of gay marriage would also be there and the prayer would be a provocation. He wrote to Bergoglio seeking advice, he said, and Bergoglio called him directly, suggesting they pray at home instead.”

As highly Catholic nations, like Brazil and Colombia, continue slowly progressing towards full marriage rights for same-gender couples, perhaps the detente approach of Pope Francis on civil marriage will mute some of the most vocal anti-LGBT opposition. How the new Pope will deal with, if at all, the issue of marriage equality spreading throughout the Americas during his first return visit will be interesting to track.