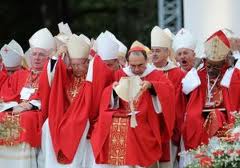 Thanks to Bondings 2.0 reader Tom Luce, we are able to post excerpts from his translation of the French bishops’ document on same-gender marriage that we announced a few days ago.  As we mentioned, this document contained several unusually positive reflections about respect for gay and lesbian relationships, and the need to have civil and open discussion on the matter of marriage.  No U.S. bishops’ document even comes close to the content and tone of this document which was issued by the Family and Society Council of the French bishops’ conference.

To make sure that we are not giving the wrong impression, let me be clear that the document does not in any way support the legalization of marriage equality.  Still, the strong call for respecting gay and lesbian relationships is a giant step forward in hierarchical discourse, and it should be celebrated.

Below are excerpts from some of the more positive sections of this document which is entitled “Expand Marriage to Persons of the Same Sex?  Let’s Open the Debate!”  If you can read French, you can find the original text here.

I have not excerpted any of the sections which argue against marriage equality, since they are basically the same ones that have been used many times before.  The document is seven pages, single-spaced, in length, so it would be cumbersome to reproduce it here.  Again, our thanks go to Tom Luce for translating this document.  Tom blogs at leastharm.weebly.com.

“Expand Marriage to Persons of the Same Sex?

“Our society is facing a new situation, unexplored. Homosexuality has always existed, but until recently there had never been a claim on the part of homosexual persons to give a legal framework to a relationship to be entered into an historical
record, or to be seen as endowed with parental authority. It belongs to political authorities to listen to this request and make the most appropriate response. This response, then, is a political choice. The opening of marriage to same-sex persons is neither imposed by European law nor by any international convention. It is a policy option among others and a true democratic debate is needed to develop the best solution in the interest of everyone. . . .

“In order for this debate to be undertaken it is important first of all to recognize the conflict that exists between the meaning of heterosexual marriage and the contemporary homosexual experience. Without being aware of the issues within these divisions and differences, any real political work is impossible.1 It is a matter of respecting all the players in this debate and to allow each one to reflect more profoundly and to freely express ones convictions. If every reluctance or questioning of this reform of the law of the family is qualified a priori as “homophobic”, there can be had no deep debate. It’s the same when the request of homosexual persons is disqualified a priori. . . .

“The respect of all the players in the debate implies a common listening, a disposition to understand the arguments expressed and a search for shared language. This search for shared language takes for granted, on the part of Catholics, to translate the arguments drawn from Revelation into a language accessible to every open mind. In the same way in this debate which concerns the meaning of civil marriage, there is no place for discussing religious marriage, nor at the outset the connections between civil and religious marriage. It is not a matter of Catholics imposing a religious point of view, but to bring their contribution to this debate as citizens, basing themselves on anthropological and legal arguments. . . .

“If respect for the person is then clearly affirmed, it must also be admitted that homophobia by no means has disappeared from our society. For homosexual persons, the discovery and acceptance of their homosexuality often sets up a complex process. It isn’t always easy to assume the acceptance of one’s homosexuality in his/her professional circles or in his/her family circles. The victims of prejudice have a hard life and attitudes only change slowly, including within our Catholic communities and families. They are, however, called to be at the stage of welcoming every person, whatever may be his/her place on the path of life as child of God. So that which founds, for us Christians, our identity and equality among people is the fact that we are all sons and daughters of God. Unconditional welcoming of persons does not entail approval of all their acts, on the contrary, it recognizes that the human being is bigger than his/her acts. The rejection of homophobia and the welcoming of homosexual persons, such as they are, make up necessary conditions to be able to leave behind superficial reactions and enter into a calm debate around the demand of homosexual persons. . . .

“The diversity of homosexual practices must not hinder us from taking seriously the aspirations of those men and women who wish to engage in a stable bond. The respect and recognition of every person takes on henceforth a primary importance in our society. The discussions about multiculturalism, racism, feminism, and homophobia are underpinned by this demand for recognition which is expressed today in terms of equality. The non-recognition is experienced as oppression or discrimination. . . .

“Society, as well as the Church in her own domain, hears this demand on the part of homosexual persons and can seek an answer. All the while affirming the importance of the difference in sexes and the fact that homosexual partners are different from heterosexual couples because of the impossibility to procreate naturally, we are able to appreciate the desire for a commitment to fidelity in a love relationship: of a sincere attachment, of a deep caring, one for the other, and of a lasting bond that goes far beyond the putdown of homosexual relationships as a simple erotic involvement. . . .

“The Catholic Church calls the faithful to live such a relationship in chastity but she recognizes, beyond the one sexual aspect, the value of solidarity, of the attention and care of the other which can manifest itself in a lasting affective relationship. The Church wants to be welcoming toward homosexual persons and will continue to bring its contribution to the fight against every form of homophobia and discrimination. . . .

“An evolution of the law of family is always possible. But rather than to give in to the pressure of different groups, France would do honor to itself by setting up a true debate in society and by looking for an original solution which would do right to the demand for recognition of homosexual persons without however infringing upon the anthropological foundations of society.”

Can it be that the positive tone in this document is simply a persuasive strategy so that the bishops do not sound so harsh?  Perhaps.  I prefer to take them at their word–and I hope and pray that people will hold them to their word, too, so that these positive attitudes will be backed up by actions.