Responding to President Donald Trump’s apparent ban on transgender soldiers in the military, the archbishop for the Military Services, USA released a statement endorsing the ban. Meanwhile, there’s been silence from U.S. bishops on another Trump administration act that could advance discrimination against LGBT people. 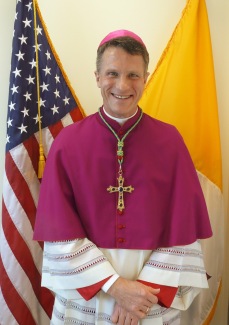 Archbishop Timothy Broglio opened his statement on the transgender ban with an affirmation that the church cares for all people “regardless of personal choices or conditions, because Christ offers salvation to all people.”

While Broglio supported Trump’s trans ban, he believed that the president missed the real issue about gender identity. Broglio said that trans soldiers are not problematic because of military readiness or cost, as the president claimed, but because of a deeper reason. Broglio said the ban fails “to address the essence of the issue – the dignity of the human person.”Broglio explained:

“[G]ender ideology undermines basic Christian anthropology by defining the person as a disembodied mind and the body as a mere instrument. . .Sexual orientation and gender identity issues reflect a rapidly increasing and incorrect societal attitude that individual behaviors in life should pursue immediate and personal choices rather than eternal truth.  In extending the maternal care of the Church to the faithful of this Archdiocese, it is opportune to reaffirm that personal choices in life, whether regarding the protection of the unborn, the sanctity of marriage and the family, or the acceptance of a person’s God-created biology, should be made not solely for a penultimate reality on this earth but in anticipation of the ultimate reality of sharing in the very life of God in heaven.”

Other Catholics endorsed the president’s ban, even while it is still unclear whether his tweet constituents an actual order and how such an order would be implemented. Theologian Chad Pecknold of The Catholic University of America described the ban as the “right decision” because trans people being respected “doesn’t mean that they are fit for combat in the defense of a nation.”

The Trump administration took another anti-LGBT action on the same day as the announcement of the ban, which was also the 69th anniversary of when the military was racially desegregated.

The Justice Department announced that it would no longer interpret Title VII of the Civil Rights Act of 1964, which bars employment discrimination for certain protected classes, to be inclusive of sexual orientation. This decision reverses actions taken by President Obama’s Justice Department, which had also interpreted the law as protecting workers based on gender identity. So far, Catholic bishops in the U.S. have been silent about this discriminatory regression.

These two responses undercut church leaders’ claims that LGBT people should be shown “respect, compassion, and sensitivity.” Broglio and Pecknold speak in terms that treat trans people as objects and as problems with which the church must deal rather than understanding trans people as members of Christ’s body and gifts to the world. Their words seem to indicate they have not personally encountered a trans person and listened to such a person’s story. Their theology derives from anti-trans ideology rather than being grounded in lived realities and scientific knowledge. They certainly do not seem truly concerned with the human dignity of trans people, despite Broglio’s statement that he is.

Church leaders should vocally oppose federal actions that would allow more employment discrimination against LGBT people. While there are more complicated issues when it comes to church workers, church teaching clearly rejects the firing of an employee based on sexual orientation and/or gender identity/expression. That same church teaching says “every sign of unjust discrimination should be avoided.” The bishops’ collective silence on this issue when they have so quickly spoken out to oppose LGBT issues, such as marriage or transgender equality, is sadly telling.

In other similar situations, Church leaders have responded differently than Broglio. Pope Francis himself, whose record on gender identity is admittedly mixed, readily affirmed one nun’s ministry with transgender women in Argentina. Chicago’s Archbishop Blase Cupich said recently that “people should be called the way they want to be called.” Most of all, U.S. bishops could listen to their German peer and papal adviser, Cardinal Reinhard Marx of Munich. He recently said the church should be more concerned with discrimination against LGBT people than marriage equality. His statement included these words:

“[It is worth recalling] that the Church has not exactly been a trailblazer as far as the rights of homosexuals are concerned. We must express our regret that we did nothing to oppose homosexuals from being prosecuted. “

Shifting positions to be truly concerned with the dignity of transgender people and discrimination against members of LGBT communities would not be difficult for the U.S. bishops if they have the will to do so. The sad reality is that even four years into Pope Francis’ leadership, that will too often remains absent.

The Impact Fr. Martin’s New Book Is Already HavingMovement to Canonize Fr. Mychal Judge Takes Off, But More Help Is Needed
Scroll to top
Loading Comments...
%d bloggers like this: