The Catholic LGBT sensation of the summer has definitely been the publication of Jesuit Fr. James Martin’s book, Buidling a Bridge:  How the Catholic Church and the LGBT Community Can Enter Into a Relationship of Respect, Compassion, and Sensitivity.   Even before its publication in mid-June, and continuing up to today, I have been receiving daily emails about the book–reviews, inquiries, suggestions for how to use it–and the pace doesn’t seem to be slowing down.

Why has this book made such a splash, when there have been many other books about Catholic LGBT issues published over the past few decades?  It’s hard to say for sure, but I can think of several possibilities. 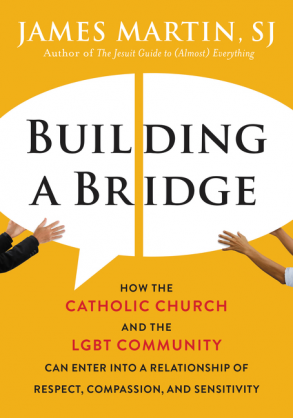 First, I think it is important to notice who the author is: a priest.  While there have been numerous books about Catholic LGBT issues written by theologians, advocates, scholars, and people in the pews, it has been a very long time since a priest has authored such a book.

Moreover, while some priests have written about pastoral care or theological subtlety, I can’t think of any who has tackled the thorny issue of the relationship between the institutional church and the LGBT community. I think that the topic of developing a good relationship between these two groups is comparable in intensity to the highly emotional topic of sexual ethics.

Another reason for the book’s popularity is that it has been put out by a major publishing house, HarperOne.  This gives the book more of a mainstream audience than most Catholic LGBT books which are usually published by religious or LGBT presses.

Of course, Fr. Martin’s renown plays a role in the book’s popularity, too.  Already well-known as one of the top contemporary spirituality writers, Fr. Martin is also much sought after by the news media as a commentator on Catholic news topics.  While his fame certainly plays a role in the book’s distribution, it’s also important to remember that Fr. Martin also took a major risk in deciding to address an issue which is fraught by controversy in the Church.

While there have been plenty of reviews of Martin’s book, it’s important to note that not all of them have been positive.  Reviewers from both progressive and conservative Catholic camps have faulted him for not writing about sexual ethics.  While the first group hoped he would be critical of church teaching about sexual relationships, the second group hoped he would have defended it more.

Some of these reviews, however, miss the main point of the book: Fr. Martin is analyzing the relationship between the institutional church and the LGBT community, not the sexual ethics teaching.  The sexual ethics teaching is, of course, important, but it is not the only issue that stands between better relations between the institutional church and the LGBT community. Much healing and reconciliation needs to be accomplished, and Martin is correct that “respect, compassion, and sensitivity”–a quote from the Catechism which are Martin’s three themes of bridge-building–need to form the basis of that healing and reconciliation.

As I have been traveling to various Catholic meetings and speaking with Catholic people who work in the institutional church across the country this summer,  almost every person I meet has told me how inspiring Fr. Martin’s book was to them.  That bit of evidence, unscientific but absolutely true, tells me that the most important audience for this book are church professionals.  That is exactly the group that needs to hear Fr. Martin’s message the most, and my experience tells me that he has been wildly successful in that regard.  The news earlier this week that Cardinal Cupich endorsed Martin’s recommendation that church leaders should use the identifying terms for the LGBT community which its members prefer is evidence that the book is having an impact in the hierarchy.

I’ve also met two groups of pastoral ministers in two different parts of the country who, independent of each other, both had the same idea:  they want to send Martin’s book to diocesan and parish leaders, including their bishops.  I believe that Fr. Martin’s message can soften the hearts of church leaders in a way that others have not been able to do.

You don’t even have to open the book to see the impact that it can have on the hierarchy.  On the back of the dust jacket are blurbs recommending the book from two cardinals (one a Vatican official) and a bishop.  What’s even more intriguing is that they are in the company of two advocates from the Catholic LGBT community–theologian James Alison and New Ways Ministry’s Sister Jeanine Gramick–who also strongly recommend the book.  If anyone needs evidence that this book can build bridges, it’s right there in the fact that this disparate company of folks have been able to find common ground.

Not commented on by mostly all reviewers is the second part of Martin’s book, which is a collection of prayers, guided scripture reflections, and spirituality material.  It’s a shame that this section is not noted by reviewers because it contains some very moving, helpful, and insightful material.  If the first part of the book is the plan for building a bridge, this second part can serve as the material for that work.  It would be wonderful if church leaders sat with LGBT people and reflected with them on some of the topics presented in that second half.

While people may legitimately differ on the details of Martin’s suggestions for how each side of the debate shows “respect, compassion, and sensitivity,” what I think is beyond dispute is that this book is having an immense impact on the discussion of the Catholic LGBT debate.  It has reached influential people in the Church who are in positions to make important decisions about pastoral care programs, local policies, and bridge-building opportunities.

The success of Fr. Martin’s book is the fact that he has gotten the discussion started again, and he has done so at a time when it is ripe for the wider church.  His book may not please all advocates on left and right, but he is reaching two gold-mine audiences: the mainstream of the Catholic Church and its leaders.

At New Ways Ministry, we believe in bridge-building, and have been striving to do this activity for 40 years.  One thing we have learned is that bridge building happens “by little and by little.” Fr. Martin’s book is one more little step in the right direction.