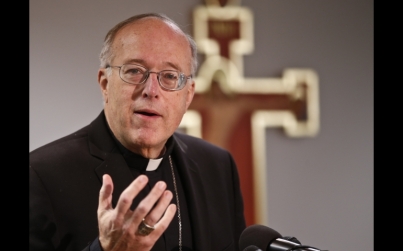 An African proverb says the following, “When you pray, move your feet.” It captures well the reality that prayer is not platitudes, but an act of one’s whole being. Even in his brief tenure, few bishops have lived this truth as well as Bishop Robert McElroy when it comes to LGBT issues in the church.

Following the massacre at an LGBT nightclub in Orlando, Bishop McElroy was one of less than ten U.S. bishops who acknowledged the victims’ targeted identities. He said LGBT people had been “specifically targeted and victimized,” and called on Catholics to root out anti-gay prejudices in church and in society.

McElroy expanded on this statement in an interview with the Jesuit-weekly, America. He affirmed Pope Francis’ recommendation that the church should apologize to LGBT people and others it has marginalized, saying:

” ‘When I go out and meet with laypeople. . .so many of them have family members, brother and sisters and sons and daughters, mothers and fathers who are gay or lesbian.’

” ‘For them it is a great and painful thing to feel excluded from the life of the church, and for that element. . .we are not moving fast enough.’

Treatment of LGBT issues in the church has been too limited, McElroy said, and too many pastoral workers have felt they must choose falsely between upholding church teachings and caring for marginalized peoples. He continued:

” ‘My own view is that much of the destructive attitude of many Catholics to the gay and lesbian community is motivated by a failure to comprehend the totality of the church’s teaching on homosexuality. . .

” ‘[Sexual activity exclusively in the context of heterosexual marriage is] not a teaching which applies just to gay men. . .It is teaching across the board and there is massive failure on that.’ “

Integral, but often lost in Catholics’ consideration is the Christian call “to build a society in which people are not victimized or violence visited upon them or unjustly discriminated against because of their sexual orientation.” Acknowledging existing Catholic efforts towards this end, McElroy called the church to “step it up.” He said bishops should not only issue institutional apologies, but “seek to collaborate with those in society who are working to banish discrimination and violence leveled against people because of their sexual orientation.”

” ‘We are not talking about some group or person who is the ‘other’. . .It has to be language that is inclusive, embracing, it has to be pastoral. . . [What exists is] very destructive language that I think we should not use pastorally.’ “

Bishop McElroy is backing his words with action. He participated in a San Diego memorial for the Orlando victims last night, hosted by Latinx and LGBT organizations. About his participation, LGBT Weekly columnist Nicole Murray Ramirez wrote:

“[McElroy’s attendance is] especially historic as is his statement on the Orlando attack; his outreach and compassion for the LGBT community has touched many of us gay Catholic’s hearts, and given us hope of a better relationship with the San Diego Catholic Diocese.”

[Editor’s note:  We will try to provide coverage of McElroy’s participation in this vigil in the next few days.]

McElroy’s prayers for the LGBT victims in Orlando are backed by his movements towards reconciliation. He clearly believes in Pope Francis’ welcoming approach, and is seeking to live it out in the local church which he oversees. We hope his efforts will be received well. and that improved relationships between Catholic communities, LGBT communities, and LGBT Catholic communities will come to San Diego.

Apologies Are Good, Actions are Better Roy Bourgeois: Catholic Church Must Change Its Teachings on Homosexuality
%d bloggers like this:
Scroll to top