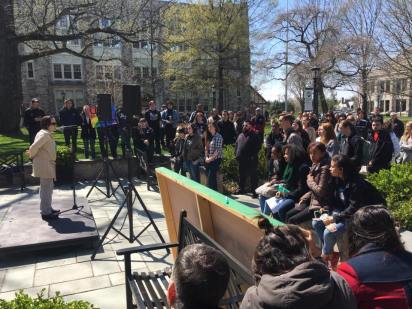 Graduation ceremonies concluded and degrees conferred, it is time for the final “Campus Chronicles” of this spring semester.

Below are several of many LGBT-related happenings in Catholic higher education. These testify, once again, to the good work that ensures campuses are safer and more inclusive spaces for LGBTQ students and staff, and also serve as a model for the rest of our church.

Protests by the infamous Westboro Baptist Church (WBC) led to unity at Loyola University Maryland, Baltimore, where community members rallied in support of LGBTQ members.  WBC is a Topeka, Kansas-based church, founded by Rev. Fred Phelps, whose members travel across the nation with vile messages on their signs to protest LGBTQ equality.

Only three WBC members were actually present at the April protest, reported the Baltimore Post-Examiner. They were met by many more counter-protesters, including alumni, and at least one hundred current students. University officials barred WBC from campus, with University spokesperson Nick Alexopulos saying the school celebrated diversity and would “remain united. . .as One Loyola.”

WBC had targeted Loyola Maryland in part because of its two LGBT student organizations, reported The Baltimore Sun. Student Kelly Mueller defended these organizations in advance of the protests, writing in The Odyssey:

“When you attacked the Jesuits, the Theology Club, Spectrum, and OUT Loyola, you attacked our entire community, and we will not stand for it. . .If you come to campus, I hope you can see past your bigotry and recognize the true spirit of God’s love present on our campus.” 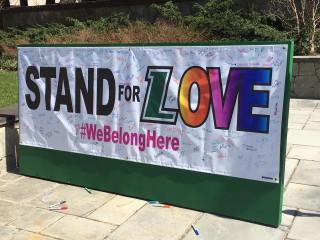 Spectrum, LGBT and Allies group,  said on Facebook that the counter-protest meant “the message of love prevailed.” WBC’s protests coincided with the University’s Sexual and Gender Diversity Awareness Week, which reports on social media said was quite successful. WBC had also planned to picket Archbishop Curley High School and Catholic High School of Baltimore, too, but there are no reports that they actually showed up at either school.

The College of the Holy Cross in Worcester, MA will begin offering gender-neutral housing options next year to accommodate trans* students and those students seeking a more affirming LGBTQ living environment.

USA Today’s recent article exploring college athletics and Title IX religious exemptions positively featured the inclusive policies of two Catholic colleges: the University of Notre Dame and Fordham University. While a number of Catholic institutions have sought to exempt themselves from LGBT protections on religious grounds, this article reveals the positive steps which other Catholic schools have taken to protect all students in advance of new regulations.

Know more good news happening for LGBT inclusion in Catholic higher education? Let us know in the ‘Comments’ section below or send a tip to info@newwaysministry.org.