Two archbishops from the United States made headlines this week related to gay issues.  Each story leaves me with a different feeling, though neither one is a good feeling. 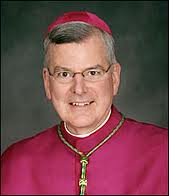 The bigger of the two stories centered on Archbishop John Nienstedt of St. Paul, Minnesota.  A news report from Commonweal informed the world that multiple allegations have emerged that Nienstedt made sexual advances toward priests, seminarians, and other men.  The archbishop strongly denied the veracity of these claims.

Nienstedt ordered an investigation of allegations against him, and the archdiocese hired a Twin Cities law firm to conduct the investigation.  In his statement, the archbishop said that he did so because that is what he would do with allegations made against any other priest, too.

This story is complicated by a number of factors.  First, there is Nienstedt’s record of very strong anti-gay comments, many of which were made during Minnesota’s debate about a constitutional amendment prohibiting same-gender marriage in 2012.  Second, Nienstedt has already been under fire because of mishandling of sex abuse claims against some of his priests.

Naturally, one of this story’s most popular responses has been to note the irony of witnessing someone who has been strongly homophobic in his speech possibly turning out to be homosexual himself.   When this accusation is made, it is sometimes made with glee, probably because to many people’s eyes and ears it is so obviously a personal problem when someone becomes so obsessed with homosexuality.   We have seen this behavior so often in our public and private lives:  people hate most in others what they really hate about themselves, and usually cannot admit about themselves.

These allegations have to be further investigated, but should it turn out that they are true, I think I will be sadder, rather than happier, to learn this reality.  To me, what it would mean is that the homophobia in our church and in our world had so affected this particular man that his ability to respond with love towards himself and others was extremely stunted.  I am angry at the harm he has caused others, but I find myself strangely sympathetic towards him if it turns out that he caused even greater harm to himself.

The second story, reported briefly in only the Catholic press, focused on the fact that, for the second time, Archbishop Rembert Weakland, the former archbishop of Milwaukee, was refused retirement residency at a Benedictine abbey.

Weakland, a Benedictine monk and former head of the worldwide Benedictine community of men, resigned as archbishop after it became public that he had had a sexual relationship with another man and that he had paid the man to be quiet about their involvement.   The relationship was not pedophilia and it was consensual.

Days after Weakland announced these facts, he expressed repentance publicly, celebrating a Mass where he asked for forgiveness.

The National Catholic Reporter noted that the rejection for residency came from St. Vincent Archabbey, in Latrobe, Pennsylvania, the same abbey where Weakland entered the community when he was 18 and lived for 20 years.  Although though the abbot of the community did not speak to the paper, Weakland offered his own thoughts about why he was refused:

“The Vatican recently laicized a Latrobe monk accused of misconduct, Mark Gruber, whose presence was creating some turmoil in the community. ‘The atmosphere was not a good one for me to return to,’ Weakland wrote. ‘Thus I will not be returning to Latrobe right now and at age 87 one never know what can happen in the future.’ “

The news story went on to explain the archbishop’s life since retirement:

“In Milwaukee, Weakland leads a low-profile life. He lives alone in an apartment and is said to attend daily Mass. He has no public role in the church, and when the current archbishop celebrates Mass and prays for the pope and bishops living in the diocese by name, Weakland is not mentioned. He was not allowed to deliver a homily at an annual priest retreat some years ago.”

This story leaves me feeling very sad–for Weakland, for the Benedictines, for our Church.  As in the Nienstedt case, we see how it is possible that fear of same-sex feelings and relationships can lead to behavior which harms one’s self and others.

The lesson that I take from both of these news stories is that we still have  a lot to learn in our church not only about sexuality, but also about forgiveness.

The Wild Reed: “Has Archbishop Nienstedt’s “Shadow” Finally Caught Up With Him?”

What Impact Will Hobby Lobby Ruling Have on LGBT Rights?On Independence Day, Remembering the Global Struggle for LGBT "Life, Liberty,...
Scroll to top
Loading Comments...
%d bloggers like this: