Today is canonization day for two recent popes:  John XXIII and John Paul II.  In yesterday’s post, I mentioned that Catholics who support LGBT equality are somewhat mixed in their emotion today because while John XXIII opened the way for a discussion of justice in the church, John Paul II instituted a number of developments that were detrimental to LGBT people.   Yesterday, I reviewed John XXIII’s record, and today I will will look at John Paul II’s record.  Tomorrow, this blog will review some of the recent commentary written recently about the influence these two men have had on the church and the world. 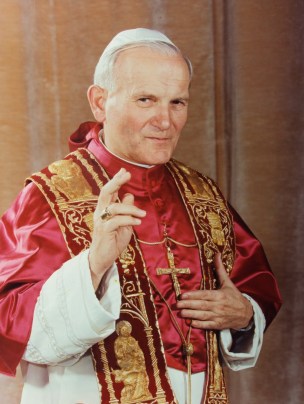 There are many memorable things that will distinguish John Paul II’s papacy:  the downfall of the Soviet Union, the assassination attempt on his life and his moving forgiveness of his would-be assassin, his many and varied travels to all corners of the world.

Unfortunately, John Paul will also be remembered as the pope who instituted a number of developments that were negative and unduly harsh towards LGBT people.  Through numerous measures, messages, and actions, this pope tried to hold back the burgeoning LGBT justice and liberation movement that was initiated because of the reforms John XXIII instituted in the church.  I will mention only a few major highlights.

To begin with, John Paul oversaw and authorized the Congregation for the Doctrine of the Faith’s 1986 Letter to the Bishops on the Pastoral Care of Homosexual Persons which introduced a number of harmful principles and concepts.  For example, this document:

–introduced the term “objective disorder” to describe a homosexual orientation.  Immediately this term caused much confusion because it sounds as though the Vatican is calling homosexuality a psychological or medical problem, when, in fact, the term is used strictly in a philosophical sense.

–claimed that Church teaching transcends scientific knowledge: “The Church is thus in a position to learn from scientific discovery but also to transcend the horizons of science and to be confident that her more global vision does greater justice to the rich reality of the human person in his spiritual and physical dimensions, created by God and heir, by grace, to eternal life.”

–while condemning violence against lesbian/gay people, the document also blamed supporters of gay/lesbian rights for that violence, and claims that such violence can be understood and rationalized:

“when [pro-gay] civil legislations is introduced to protect behaviour to which no one has any conceivable right, neither the Church nor society at large should be surprised when other distorted notions and practices gain ground, and irrational and violent reactions increase.”

–blamed gay/lesbian people for the HIV/AIDS crisis, and labels their advocates as dangerous to public health:  “Even when the practice of homosexuality may seriously threaten the lives and well-being of a large number of people, its advocates remain undeterred and refuse to consider the magnitude of the risks involved.”

–warned bishops not to allow Church facilities to be used by groups that do not subscribe to the church’s teaching on sexual activity: “All support should be withdrawn from any organizations which seek to undermine the teaching of the Church. . . . Special attention should be given to the practice of scheduling religious services and to the use of Church buildings by these groups. . .”

In 1992, John Paul II’s Vatican issued Some Considerations Concerning the Catholic Response to Legislative Proposals on the Non-Discrimination of Homosexual Persons.  Sent privately to the bishops, the document became public when New Ways Ministry, after receiving a copy of the text from an anonymous source, released it to the press.  The Washington Post carried the first story on July 17, 1992.     This document:

–instructed bishops to be more circumspect in their support of civil rights legislation for lesbian/gay people: “Such initiatives, even where they seem more directed toward support of basic civil rights than condonement of homosexual activity or a homosexual lifestyle, may in fact have a negative impact on the family and society.”

–instructed bishops that discrimination is not unjust “in the placement of children for adoption or foster care, in employment of teacher or athletic coaches, and in military recruitment.”

In August 2003, the Congregation for the Doctrine of the Faith, with approval from John Paul II, issued Considerations Regarding Proposals to Give Legal Recognition to Unions Between Homosexual Persons. This document reiterates the Vatican’s opposition to same-sex marriage.  Among its main points:

–Heterosexual marriage would be devalued by same-sex marriage: “Legal recognition of homosexual unions would obscure certain basic moral values and cause a devaluation of the institution of marriage.”

–Permitting adoption of children by same-sex couples “would actually mean doing violence to these children…” by harming their development.

–Catholic law-makers (and all Catholics) have a moral obligation to oppose same-sex unions:

“…where homosexual unions have been legally recognized or have been given the legal status and rights belonging to marriage, clear and emphatic opposition is a duty.”  . . . .

Many Catholics saw statements like these as designed to roll-back the movement in the church which was working for greater acceptance and inclusion of LGBT people.  These efforts did not succeed.  The Catholic movement for LGBT equality is stronger than it ever was.

Clearly, John Paul II had a major blind spot when it came to LGBT people.  Some may view this fault as something evil, but I tend to look at it as a mark and reminder of the imperfect humanity that we all share.  We all have blind spots.  We all need to be educated better on a variety of issues.  While some may disagree him his canonization, for a number of reasons, I think this occasion can help to remind us that, even with our flaws, we are still all capable of sainthood.