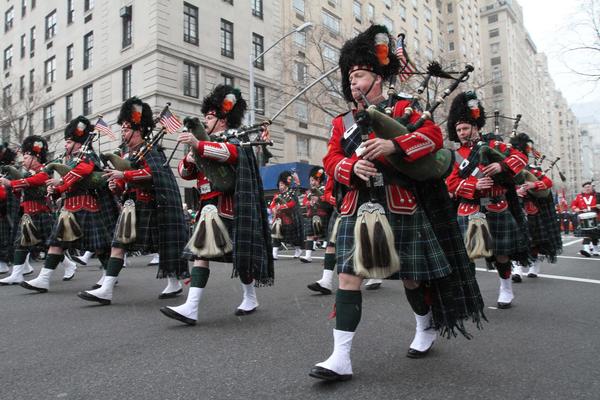 There’s a long history to the controversy between LGBT people wanting to march in St. Patrick’s Day Parades that dates back to the 1990s.  This year, the debate about LGBT participation or exclusion is being waged in the two U.S. cities with the most prominent March 17th parades:  New York and Boston.

“The new mayor said he will participate in other events to honor New Yorkers of Irish descent on March 17. “But I simply disagree with the organizers of that parade in their exclusion of some individuals in this city,’ he said. “

Though deBlasio’s decision differs from his immediate predecessor, some LGBT equality organizations are disappointed that the new mayor did not take a stronger stand:

“De Blasio’s predecessor, former Mayor Michael Bloomberg, was a supporter of gay rights but marched in the St. Patrick’s Day parade. De Blasio did not march when he served as the city’s public advocate. But he said he will not stop any city employee from marching in uniform.

“Gay groups in New York City acknowledge that court rulings have established the parade as a private, religious procession that may exclude gay groups. But allowing city workers such as police officers to march in uniform violates the city’s human rights laws, they argued in an open letter to de Blasio.”

BBC.com reported on Irish reaction on both sides of the Atlantic to deBlasio’s decision:

“Cahir O’Doherty in the New York-based Irish Central website counters that it’s important for gay Irish-Americans to be able to carry a banner in the parade ‘because if you are not seen you are not heard. And when you are neither seen nor heard, bad things can happen to you without anyone noticing. Gay people know this, but apparently quite a few others need to be reminded.’

“The parade controversy is making waves across the Atlantic, as well, where Irish government officials are split on whether to participate or join Mr de Blasio’s boycott. Irish Minister for Social Protection Joan Burton, who will be in New York on St Patrick’s Day, has announced she will not march. Fine Gael leader Enda Kenny, on the other hand, has said he will travel to New York to attend.”

“It has just always seemed strange to me that gays were fighting so hard for so long to bust into such a hoary, boozy, corny tradition. Didn’t they have something more fun and cool to do? . . .

“But certainly, if gays want in, they should get in. And that’s why Mayor Bill de Blasio is right to blow off the parade in protest of the Putinesque restrictions.”

In Boston, a bastion of Irish-American culture and history, that city’s mayor did not march in the annual parade, which was held on Sunday, March 16th.  His decision followed weeks of negotiations and decisions by gay rights groups, the city’s mayor, and others.

The Boston parade is organized by the South Boston War Veterans Council, and this year a group of gay veterans requested to march in the parade carrying a banner from Mass Equality, the state’s LGBT rights organization.  The gay vets were members of LGBT Veterans for Equality.

Parade organizers originally denied the request, but then Boston’s Irish-American mayor, Marty Walsh, stepped into the discussion, saying that he would not march in the March 16th parade unless the gay individuals were allowed to participate. The Boston Globe reported his reason for not marching:

“As mayor, I feel like I should use my influence. I feel the parade should be inclusive.”

Walsh tried to broker an agreement between the two groups.  At one point, there was hope that an agreement could be reached.  According to Gay Star News, the tentative agreement was that the gay vets could march, as long as they didn’t wear any signs which acknowledged their sexual orientation.

The tentative deal to allow the gay group eventually collapsed because MassEquality said it could not abide by the provision that people not be allowed to identify their sexual orientation.  According to NECN.com, MassEquality Executive Director Kara Coredini said:

“LGBT people need to be able to identify themselves as LGBT people. It’s as simple as that. There’s a lot of ways that can be done, and that is a conversation we’re having now with organizers.”

So, after two weeks of negotiation, it was decided that the gay group would not march.  Not all loyal Irish Americans were happy with the decision to exclude the group.  The Boston Globe noted one man’s support for the gay veterans:

“Neil MacInnes-Barker, a former sergeant in the US Air Force, said he signed up for the march two weeks ago, as negotiations were starting. He said that normally he does not participate in the parades, including ones celebrating the gay community, but that he wanted to be present in the St. Patrick’s Day event.

“ ‘If there are people — Irish Americans — who are LGBT in South Boston, then I want to march for them,’ MacInnes-Barker said. ‘If they are afraid of being intimidated . . . then I will stand for them.’ ”

“It wasn’t long ago in this country that the Irish and Roman Catholics were both subject to extreme bigotry.

“That some in these demographic groups are in a position to be bigoted toward others is perhaps an accomplishment in itself, showing that they’ve moved up the ranks. But what a sad cycle and a shameful tradition for this great American city.”

Perhaps most significantly, the Sam Adams beer company, announced that they would be pulling out of the parade.  In a statement, quoted by The Boston Globe the company said:

“We were hopeful that both sides of this issue would be able to come to an agreement that would allow everyone, regardless of orientation, to participate in the parade. But given the current status of the negotiations, we realize this may not be possible.”

Chuck Colbert, a gay, Irish American veteran, wrote in The Boston Globe that he hoped some creative solution could be found to the impasse:

“So let me offer a suggestion: If I — or anyone — were to march in an LGBT-identified contingent, holding a small Irish tricolor and rainbow flag, would that be acceptable to parade organizers? What about green T-shirts with a rainbow flag imprinted on it? What about carrying rainbow-colored balloons or banners?

“With all the creativity among the Irish of Boston and the city’s LGBT community, surely we can move the parade to forward march for all.”

And though they won’t be carrying signs about their sexual identities, gay marchers did, in fact, take part in the parade.  According to The Boston Globe,  Randy Foster, a gay man organized a “diversity float” with his neighbors:

“Foster and his friends and neighbors are not marching Sunday as part of a gay organization. They are marching as South Boston residents who have coalesced around building a park in a corner of the neighborhood known as the Lower End. Many of the people working on the float just happen to be gay. And they have been embraced by the Allied War Veterans Council, the parade’s longtime sponsor.

“’They know us as their neighbors first and as gay second,’ said Foster, an Air Force veteran who served in Desert Storm and who has lived with his husband in South Boston for seven years. Of outside gay groups coming in and hoping to march, he said: ‘How in the world do you ever get compromise if the first statement out of your mouth is, “I’m different than you?” ‘

“Fact: South Boston has a substantial and growing gay population. Fact: A second neighborhood contingent with gay marchers will also be in the parade. Fact: Bill Linehan, City Council president, attacked as unfriendly to gay causes recently by some liberal activists, has been a catalyst behind the scenes to get the neighborhood groups accepted in the parade.”

So, perhaps creativity did make some advancement in the parade, which may help future possibilities for full equality on St. Patrick’s Day.