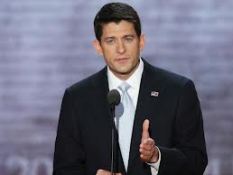 Rep. Ryan, a Catholic, spoke at a town hall in Wisconsin last week where an attendee questioned him about a poor rating with the Human Rights Campaign, specifically a 1999 vote against allowing same-gender couples in the District of Columbia to adopt. David Gibson reports on the comments at Religion News Service, quoting Rep. Ryan as saying:

“Adoption, I’d vote differently these days. That was I think a vote I took in my first term, 1999 or 2000. I do believe that if there are children who are orphans who do not have a loving person or couple, I think if a person wants to love and raise a child they ought to be able to do that. Period.”

The Wisconsin congressman’s record on LGBT rights is abysmal otherwise, having voted against the “Don’t Ask, Don’t Tell” repeal and the Matthew Shephard Hate Crimes Protection Act and vocally opposing marriage equality. Gibson points out that in another shift, Rep. Ryan also claimed:

“…he has “always supported” civil unions. Though there is no evidence to support that, it’s a clear sign that the politics of the issue have changed and that even the most conservative Republicans need to appear more hospitable to gays and lesbians in order to expand their voting bloc.”

You can view the town hall remarks in the YouTube video below:

Last weekend, on the television program Meet the Press, Newt Gingrich, a Catholic, reinforced his opposition to LGBT rights, including adoption by same-gender couples. Gingrich expressed an increasingly common talking point by anti-gay groups who claim that LGBT rights lead to the persecution of Christianity. The Huffington Post quotes the failed presidential hopeful:

“‘Does [supporting LGBT rights] mean that you actually have to affirmatively eliminate any institution which does not automatically accept [homosexuality]?'”

However, another panelist on Meet the Press challenged Gingrich’s claims about Catholic Charities in Massachusetts and D.C. being forced to end their adoption services. The Huffington Post reports:

“Panelist Joy Reid, managing editor for The Grio, countered Gingrich’s argument, saying that Catholic Charities decided on its own to discontinue adoption services, rather than comply with the state’s nondiscrimination laws and provide adoptions for both heterosexual and same-sex couples.”

Pew Forum polling last year showed 55% of Catholics supported LGBT adoption rights, and it is increasingly clear to politicians this number is climbing. Recent controversies with Catholic Charities and relations to government in Palo Alto, California and Denver reiterate that the legal struggles will continue for the foreseeable future. As for the implications on Church politics, David Gibson writes:

“…Ryan, who has touted his Catholic faith as evidence of his social as well as economic conservatism…[has a] significant break with the Catholic hierarchy, which has even shut down adoption services rather than placing children with same-sex couples.

“This could spell more trouble for the Catholic bishops in their battle on gay rights; they have already been losing their own faithful, and losing political allies like Ryan is tough.

“Then again, many would say Ryan’s economic policies were hardly in line with the bishops and Catholic teaching, so there.”