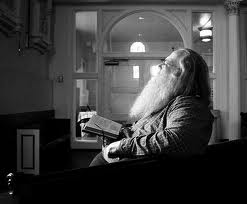 Father Richard Lawrence of St. Vincent dePaul parish in Baltimore, Maryland, preached yesterday about supporting marriage equality in the upcoming referendum on the issue in the state.  While Baltimore Archbishop William Lori asked pastors to read a letter opposing marriage equality, Father Lawrence did so, but then added his own view on the matter.

You can watch the 17 -minute homily by clicking here.

You can also listen to just the audio of the homily by clicking here, and then clicking on “October 28.”

You can read a National Catholic Reporter news story of the homily by clicking here.

Here’s a summary of his remarks:

Fr. Lawrence transitions from reading Archbishop Lori’s letter by stating that it cannot be ignored by faithful Catholics. He also states that in his homily, he will provide “some other thoughts that might be considered in your process of conscience formation.”

He makes the following points:

1) There is a separation between religious law and civil law.  While there are some civil laws we cannot accept, there are others than we can accept, even if we disagree with them.  He makes the case that Catholic institutions (parishes, schools, hospitals) hire and provide benefits to people whose marriages are not canonically valid.  We may not agree with the civil law in this regard, but, as Catholics, we support that law.

2) Fr. Lawrence states that “personally, we can go further than that,” as he explains a hope for the eventual change in church teaching regarding same-sex relationships. Citing Vatican II’s change in theology of sacramental marriage by making the procreation of children an equal function to the mutual support and common life of the couple, he notes that both became primary functions of marriage.

3)  If it is possible for church teaching on marriage to change, than why can’t civil law on marriage change, he asks.

Fr. Lawrence concludes by urging parishioners to develop and follow their consciences.

He received thunderous applause and a standing ovation at the conclusion of homily.  New Ways Ministry adds our own applause to that of his parishioners!

Dignity/Chicago Celebrates Four Decades of Ministry Maine Catholics Urge Others to Vote Their Consciences on Marriage Equality ...
%d bloggers like this:
Scroll to top