At World Youth Day in Krakow last month, Pope Francis again condemned “the ideology of gender.” The outcry from LGBTQ advocates that resulted was both predictable and understandable.  Francis once again upheld gender essentialism against the more complex experiences of LGBTQ people.  Once again he seemed paternalistically to prefer a “simple faith” over sophisticated theological reflection on gender.  And once again he seemed simply to repeat the maxims of John Paul II and Benedict XVI.

And yet it would be too bad to overlook an important difference in Francis’s position, a difference we need to understand if we hope to have thoughtful discussions on LGBTQ issues with people of his persuasion. Specifically, we can listen more closely to Francis’s claim that rich countries are unjustly shoving the idea of gender choice down the throats of poor ones. We hear Francis as if he were talking primarily about gender, but for him the real problems are northern cultural imperialism and the still-potent effects of colonialism.

The story behind the slogan “the ideology of gender”—a slogan that almost always appears in the context of coercion of poor countries—concerns a loan for the construction of schools for the poor. Its approval, Francis notes, was contingent on a minister of education accepting and using a textbook that the funders prescribed in which “gender theory was taught.”  In Francis’ words: 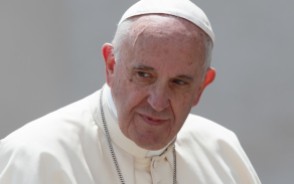 “This is ideological colonization. They introduce an idea to the people that has nothing to do with the people. With groups of people yes, but not with the people. And they colonize the people with an idea which changes, or means to change, a mentality or a structure….certain loans in exchange for certain conditions….Why do I say ‘ideological colonization’? Because they take, they actually take the need of a people to seize an opportunity to enter and grow strong — through the children.”

It’s clear from the context that the situation was coercive:  if you want to borrow our money to serve children in desperate need of education, you will use the book that we approve, whether or not it makes sense to your students in their historical and cultural setting or addresses their most pressing educational deficits.

From Francis’s perspective, northern countries who still benefit from colonialism should not be placing endless conditions on almost all forms of grant-in-aid, and even interest-bearing loans, that they make to the global south, as if southern countries should “earn” northern support.  Rather, as a matter of justice northern nations should be freely sharing wealth, academic expertise, and other advantages they wrongly gained from colonialism with their neighbors whom they wrongly impoverished by it.  That some conditions the north places on aid seem intended to undermine what he perceives as southern nations’ last outposts of strength, their family networks, is the last straw.

We can work, write, and pray for Francis’s conversion on this issue.  But in the meantime, here is an opportunity for creative response to his legitimate frustration with the global north.  We can recognize that bad delivery systems compromise good content.  For example, despite coercive, ultimately unsuccessful northern methods of “conversion” that Bartolomé de Las Casas condemned nearly 500 years ago when the dominant approach evangelization method of European explorers was, in his words, to “annoy, persecute, afflict, and arouse” Native Americans. Some northerners managed to follow his advice of employing “the power of gentleness, service, kindness, and the words of the gospel to encourage them to put on the gentle yoke of Christ.”  He argued for this, and more, for Native American peoples European courts.  He didn’t always win.  But thanks in part to his critique of coercion, Christianity stuck.

Likewise, we northerners believe that the Spirit of freedom and truth is truly stirring among LGBTQ people today.  Yet, our governments and multinational institutions are justly accused of repeating the sin of coercion.  What if, despite our marginalization, we recognized our comparative privilege and power? What if we used that power to lobby not just for loans, but for reparations, for the global south?  What if, in addition to continuing our important efforts at gentle, kind, compassionate service to LGBTQ people worldwide, we used that power to convince our perhaps well-meaning but coercive governments to be less heavy-handed?  That might preach.  Like Bartolomé de Las Casas, we will lose some cases.  But our message too will eventually stick.

Bondings 2.0: “Pope Francis’ Remarks on Gender in Schools Deemed Ambiguous, Out of Touch“

Italy Is a Case Study for How the Church Can Build Up a Marriage CultureGlobal Catholics ‘Lament’ Gender Identity Remarks by Pope Franc...
Scroll to top
Loading Comments...
%d bloggers like this: