A coalition of Catholic, LGBT, and Hispanic groups have invited Pope Francis to meet with LGBT Catholics during his U.S. visit in September, contrasting with the more cautionary policies of Archbishop Charles Chaput and the 2015 World Meeting of Families. The New York Times reports:

“In a formal letter sent to Pope Francis at the Vatican, groups representing gay and transgender people, Catholics, and Hispanics said the church in America was in the midst of a ‘pastoral crisis’ over gay issues and asked to meet with him while he was in the United States. While some American conservatives are eager to see Pope Francis make use of his popularity on this trip to advance the fight against abortion and same-sex marriage, gay Catholics want him to acknowledge their rejection by the church, and to welcome them as full members with equal access to sacraments like baptism and marriage.”

“We see so many people we love abandoning the church because of the kinds of indignities and pain that they’re subjected to…whether it’s being denied a kid’s baptism or hearing a priest make horrible comments during a homily. Everybody’s got stories of pain and alienation, and those things do real harm to people. And it needs to end.”

The Times coverage includes the story of Lui Akira Francesco Matsuo, a transgender Catholic who was rejected from his Detroit parish a few years ago. Matsuo, who is originally from Japan, says Pope Francis “lost my trust” when the pontiff compared gender theory to nuclear weapons, but has hopes for the upcoming visit:

“I want him to extend his hand openly, especially to the transgender community…I am a practicing Catholic. I just don’t have a parish I can call home.”

Nicole Santamaría, an intersex woman from El Salvador, shared her own desires for Pope Francis’ visit:

Santamaría and her mother are among fourteen LGBT Catholic families participating in Equally Blessed’s pilgrimage to the World Meeting of Families. These families will share their stories and represent the religious experience of Catholic families with LGBT members from around the world. You can lend your support to this effort with a donation here.

Deb Word, the Catholic mother of a gay man who did not come out until he was 23 for fear of going to hell, said she would tell Pope Francis:

“We don’t need to put this kind of trauma on a child’s soul.”

Word works closely with Catholic parents through Fortunate Families, as well as having provided a home for more than 17 LGBT youth experiencing homelessness over the years. The letter calls particular attention to to the plight of LGBT youth who experience elevated levels of bullying, discrimination, self-harm, suicide attempts, substance abuse, homelessness, and family rejection. The letter stated:

“This is a crisis that the church can help to address through effective pastoral care and programs that provides love and support for these youth.”

Initially considered as a speaker at the World Meeting of Families, Word was rejected after acknowledging the harm church teaching has caused LGBT people. Fortunate Families’ application to exhibit was rejected in addition and the only LGBT session at the Meeting will be by a celibate gay man and his mother.

Pope Francis, who has stressed “encounter” as an important part of ministry, should listen to these faith-filled yet pained stories Outreach to LGBT Catholics by the pontiff will be doubly meaningful in Philadelphia, where Archbishop Charles Chaput has helped lead the American bishops’ crusade against many LGBT equality measures. He recently expressed gratitude that a lesbian teacher was fired and said the school exhibited “character and common sense” in being discriminatory.

“Chaput seems to have a specific mission in mind — to lay down a marker for what the church’s teachings on gay relationships and should be — and he doesn’t have time to wait until after the pope’s visit to begin making his case. . .The difference between the two men, then, might be one of tone more than substance — but it’s such a difference of tone that it has substance.”

Mark Segal, in a column for the Philadelphia Inquirer , also suggested Chaput should with LGBT Catholics and their families to hear their stories because “Your Archbishop is not a popular man in your Church or the city.”

Even with negative responses from Archbishop Chaput and the World Meeting of Families thus far, those involved with the letter believe Pope Francis has charted a different course on LGBT issues that could allow progress. Francis DeBernardo, executive director of New Ways Ministry, told the Times the pontiff was “at least willing to have conversation and interaction” and LGBT issues are no longer a “litmus test” for ecclesial exclusion. He added:

“I don’t think he’s going to be the pope that makes the changes we want…But he’s already taken a number of important steps that will, I think, pave the way for future changes.” 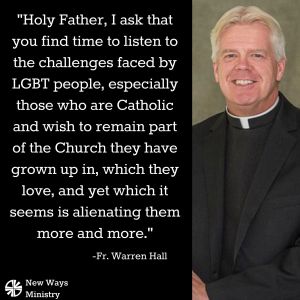 This record includes meeting with an LGBT advocate during his recent trip to Paraguay, his famous “Who am I to judge?” comment, inviting LGBT pilgrims to VIP seating during an audience in Rome, and welcoming a transgender man rejected by his Spanish parish to the Vatican for a meeting. Francis’ record has prompted other letters and calls for meetings with the U.S. LGBT community, including a recent letter by fired gay priest Fr. Warren Hall.

Whether Pope Francis meets with LGBT Catholics during his U.S. visit, they and their loved ones will be visible and participating in the World Meeting of Families and other events. The pilgrimage is not the only way that LGBT issues will be present in Philadelphia during the WMF. Groups are sponsoring events and programs “outside the walls” of the WMF, but nearby in Philly.

All are welcome to hear and to be heard, an invitation hopefully Pope Francis will take up and be transformed by his encounters with faithful Catholics who love their church while knowing LGBT people are sacred and equal in God’s eyes.

For the latest news regarding the 2015 World Meeting of Families, visit the appropriate category on the right hand side of this page or click here for all the Bondings 2.0 posts covering the preparations for this event.