Masses in London which offer an intentional welcome to the LGBT community should be expanded across England, Westminster’s (London) Cardinal Vincent Nichols is recommending.

This endorsement of these welcoming Masses comes via Fr. Keith Barltrop, the Catholic official tasked with LGBTQI outreach for the Archdiocese of Westminster.   The liturgies take place twice a month at London’s Church of the Immaculate Conception, overseen by the Jesuits, and located on Farm Street, by which the parish is familiarly known. Baltrop’s comments were reported by The Tablet:

“. . .[T]he cardinal would like to see the Farm Street Masses as a model for other parishes in his archdiocese. He added that the idea could be taken up by parishes in other dioceses.”

This desire for expansion comes two years after the “Soho Masses” were moved to the Farm Street Church at the cardinal’s request, a move which caused some concern at the time, but one now bearing fruit it seems. The Tablet explained:

“Key to the transition was that the Farm Street Masses are an extension of the diocese’s pastoral care for gay people. LGBT Catholics join the regular congregation at the 6.15 p.m. Mass on Sunday evenings twice a month and meet afterwards for a social gathering in the parish hall.”

The pastoral shift here is significant. Instead of fostering separate communities for LGBT and ally Catholics, this model seeks to fold them into regular parish life, while still providing a preferential welcome as well.

According to Martin Pendergast of the LGBT Catholics Westminster Pastoral Council, expansion depends on parishioners’ initiative and is one among several efforts to include all. The Council is also preparing a briefing paper that LGBT Catholics hope will appear at the 2015 Synod of Bishops by way of England’s delegates, Cardinal Nichols and Northampton Bishop Peter Doyle. Language is key to the Council’s requests:

“A major line of argument in the paper, he said, would be a move to encourage the Vatican to undertake a “serious review” of the vocabulary it used in relation to homosexuality.

” ‘Two terms which have been used by the Congregation for the Doctrine of the Faith in regard to homosexuality are ‘objective disorder’ and ‘intrinsic moral disorder. . .But these are inaccurate and theologically quite inappropriate – and the people who are most hurt by this sort of language are the parents of children who come out as gay. What does it mean to them to hear their children described in those terms?’ “

In June, LGBT Catholics Westminster participated in London Pride as a registered parade group. Cardinal Nichols called this an “opportunity for evangelization,” reports The Stream.

In February, LGBT Catholics from Farm Street celebrated Mass in Rome with New Ways Ministry’s pilgrims who were there during the same week. (See photo above.)

A recent editorial from The Tablet affirmed Nichols’ desire for expanded LGBT-focused Masses and stated “the Gospel must point the way on gay issues.” Calling same-gender marriage “something of a distraction in this debate,” it continued:

“Treating gays and lesbians with equal dignity and respect does not depend on being for or against gay marriage. Cardinal Nichols is a good example of that position, as is Pope Francis himself. Indeed, the new chief executive of the gay campaigning body Stonewall, Ruth Hunt, who is Catholic, told The Tablet that changing attitudes, not legislation, was now her prime concern.” 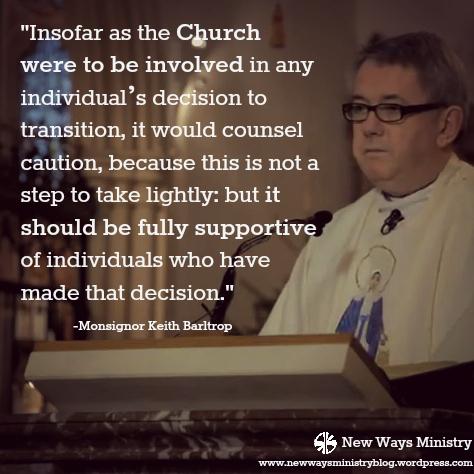 Hunt said Masses explicitly welcoming LGBT Catholics are necessary because of the “ever-widening chasm” between faithful Catholics and church institutions which reject them. Hunt, who is a lesbian Catholic herself, has previously said something must be done about faith communities which do “significant damage to people’s mental health” while silencing LGBT-inclusive religious leaders.

This is Fr. Barltorp’s second positive statement on LGBT issues in as many weeks, adding to Cardinal Nichols’ growing positive record on LGBT issues.

Last week, Barltrop said there was nothing doctrinal about one’s gender identity and the church would be “fully supportive” of those who transition after careful discernment. Barltrop responded to traditionalist critics, saying one website was the Catholic “equivalent of Islamic fundamentalism” and underscored that there is no teaching on transgender identities.

Cardinal Nichols’ desire for expanded LGBT-focused Masses is on point, especially when some church leaders choose to discriminate against these communities and deny Catholics participation in the sacraments based on who they are or whom they love. Such Masses should not stop at English shores, but indeed they should be expanded around the world!

Letter Asks Pope Francis to Encounter LGBT Catholics During U.S. VisitJamie Manson: Catholic Schools Must Say "No More" in Firing of LGBT...
Scroll to top
%d bloggers like this: