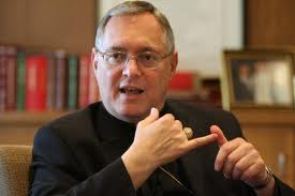 Pope Francis has many fans, but Bishop Thomas Tobin of Providence and Archbishop Charles Chaput of Philadelphia are more clearly than ever not among that fandom. Both prelates lodged some of the harshest criticisms of the synod yet, comparing the meeting to Protestantism and even calling it the work of the devil.

Tobin, in a blog post for the Diocese of Providence’s website, wrote some “random thoughts” on the synod and included the following points:

“Have we learned that it’s probably not a good idea to publish half-baked minutes of candid discussions about sensitive topics, especially when we know that the secular media will hijack the preliminary discussions for their own agendas?

“Pope Francis is fond of ‘creating a mess.’ Mission accomplished.”

What is is striking is Tobin’s apparent ignorance about the Catholic community’s history. For centuries, consensus-based decision making, synodal debates (and even, sometimes, fistfights), popular election of church leaders, and fierce controversies carried out publicly were normative rather than unique occurrences. Representative bodies are indeed found in Protestant communities today, but they are also deeply Catholic. In appealing to tradition, Tobin seems to miss the tradition of persistent messiness present since the church’s earliest days in Jerusalem.

Tobin also added an endorsement of the recently demoted Cardinal Raymond Burke, calling the cardinal, who routinely criticizes Pope Francis and LGBT advocates alike, “a principled, articulate and fearless spokesman.” Tobin has been lukewarm in his evaluations of the pope previously, and vigorously opposed marriage equality before Rhode Island, the state with the highest number of Catholics per capita, became the 10th state to legalize it.

According to US Catholic, Chaput was in Manhattan for a lecture sponsored by a conservative publication when he made his remarks disparaging the synod. The archbishop commented on the synod, which he did not attend, during a question period, saying:

” ‘I was very disturbed by what happened…I think confusion is of the devil, and I think the public image that came across was one of confusion.’ …

” ‘None of us are welcomed on our own terms in the church. We are welcomed on Jesus’ terms…That’s what it means to be a Christian. You submit yourself to Jesus and his teaching. You don’t re-create your own body of spirituality.’ “

At the same lecture, the theme of which was a comparison of traditionalist Catholics’ “internal exile” to the Babylonian exile in the Hebrew Scriptures, Chaput harshly attacked the spread of marriage equality. Characterizing LGBT advocates as dishonest and hateful, he suggested that Catholic priests refuse to officiate civil marriages “as a matter of principled resistance.” Ironically, he suggested American bishops do so “in the spirit of candor encouraged by Pope Francis” which he also attacked.

Interestingly, it is Archbishop Chaput who is set to host Pope Francis and delegations from across the world for the 2015 World Meeting of Families. We can only speculate on how the pope, who has called for church to be a “home for all” and a “field hospital” will get along with a bishop who, even after the synod, speaks of LGBT people’s human rights advancement as a point of conflict which “purifies the church and…clarifies the character of the enemies who hate her.” Or, as Michael Sean Winters at the National Catholic Reporter writes of it: “This is a train wreck waiting to happen.”

Yet, what Chaput and Tobin seemingly miss is that their ability to so strongly and so publicly criticize the pope is itself a sign of progress in the church. Under Francis’ predecessors, such frank discussions were stifled and people were silenced. Perhaps they do not dislike that the church is “rather Protestant” and “confused” as much as they claim to?

Pope Francis on Synod: 'God is not afraid of new things'Archbishop Wilton Gregory & Other Prelates: Church's Welcome to LGBT...
Scroll to top
Loading Comments...
%d bloggers like this: