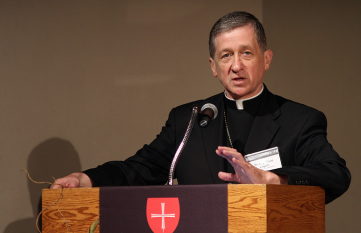 The Archdiocese of Chicago is expected to announce its ninth archbishop at 9:30am this morning, but sources like National Catholic Reporter and Whispers in the Loggia (WITL) are reporting a name is already confirmed: Bishop Blaise Cupich of Spokane, Washington.

Given Chicago is the third largest archdiocese in the US and this “is likely to be the most significant choice for the Stateside bench Pope Francis makes during his entire pontificate,” according to  WITL’s Rocco Palmo, it is important to ask: where does Cupich stand when on LGBT issues?

In 2012, amid Washington State’s referendum debate on marriage equality, Cupich provided a voice that was surprisingly compassionate and moderated.  Though he opposed marriage equality, he acknowledged the goodness of Catholics who supported LGBT equality. His pastoral letter on the referndum included one short section on the hierarchy’s teaching about same-gender couples, while spending extensive time respectfully laying out both sides’ views in an unsually objective way.

Regarding this October’s upcoming Synod of Bishops on marriage and family, the National Catholic Reporter quoted Cupich as saying the church “must allow the Holy Spirit to move us” and that clergy must “take seriously the ‘joys, sorrows, heartaches, and challenges of laypeople.’ ”

In regards to the US bishops’ campaign against LGBT non-discrimination and healthcare laws framed as religious liberty issues, Cupich affirmed the need for bishops to be in relationship with the government “so that we’re not banging our heads between our beliefs and laws.” He has also called the apocalyptic tone of Catholic officials threatening to shut down ministries over alleged religious liberty issues “scare tactics and worst-case scenario predictions” that are “uncalled for and only unnecessarily disturb the hardworking and dedicated people who are employed by the Church.”

To read a full analysis of Bishop Cupich from Dennis Coday, editor of the National Catholic Reporter, click here.

Cupich’s style is all quite a reversal from the bombastic actions of Chicago’s outgoing prelate, Cardinal Francis George, who just a week ago compared LGBT advocates to anti-Catholic groups from US history like the Know-Nothings and Ku Klux Klan.

It appears Pope Francis might be using a major episcopal appointment to shift the American episcopacy in major ways. The following, from a speech Cupich delivered in June during a conference on economics at The Catholic University of America, Washington, DC, may indicate what the pope is attempting:

“[Pope Francis uses] as his starting point real life experience rather than competing ideas. In other words the Pope offers a different epistemology, a different approach to how we know and learn or better how we are informed…But, I think those who easily dismiss what the Pope is saying because of his turn to real life experience fail to appreciate that he is calling people to a more authentic way of knowing and learning. He is challenging them about how they are informed.  And, in fact, herein lies what I believe is how we should understand his unique contribution to the tradition of Catholic Social Teaching. Instead of approaching life from the thirty thousand feet level of ideas, he challenges policy makers and elected officials — indeed all of us —  to experience the life of everyday and real people. His pithy phrase in the Joy of the Gospel says it all: Reality is greater than ideas.  Ideas cannot be disconnected from realities; the two must be in dialogue. He is concerned that leaders and policy makers ‘are stuck in the  realm of pure ideas’ thus disconnected from realities.  Ideas are important as they can classify and define, but realities call us to action.”

Cupich follows Pope Francis by forsaking an episcopal residence and instead lives in a room at the local seminary. From what we know, he appears to have a pastorally-focused ministry which is very different from Cardinal George’s approach which has been more focused on culture wars.

I have one further hope. For decades, Catholics, because of their experiences with reality rather than ideas, have come to know, love, and advocate with LGBT people . Encountering same-gender couples and LGBT youth has been the ‘stuff’ of conversions towards inclusion and equality. Hopefully, soon-to-be Archbishop Cupich will keep up his positive record and further encounter the realities of LGBT people’s lives.  Such an approach would help him, and the bishops at large, overcome harmful policies toward LGBT people.

How Can the Catholic Community Support LGBT Homeless Youth? Archdiocesan Reaction Is Insufficient in Philadelphia Hate Crime
%d bloggers like this:
Scroll to top