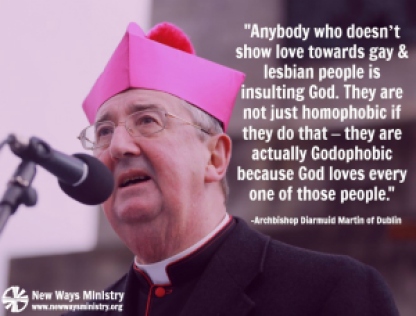 The criminalization of homosexuality has been a disturbing trend around the globe, as nations strengthen or add new laws discriminating against LGBT people. For Catholics worldwide, there is the concurrent reality that prominent Church leaders and Catholic politicians have openly supported, or even actively pursued anti-gay legislation.

Incidents in Liberia and Zimbabwe further raise these concerns, and are evidence of why it is so important for Pope Francis to defend LGBT human rights explicitly.

A bishop in Uganda was not the only clergyman who used Easter to condemn LGBT people. A report from The Advocate says a priest in Liberia priest used the feast day to attack marriage equality and the nation’s president, who has not denounced same-gender marriage. Fr. Ambrose Kroma said President Ellen Johnson-Sirleaf’s silence on the marriage issue, which is illegal in Liberia along with homosexuality in general, is evidence of her support for LGBT rights. His comments follow-up on Archbishop Lewis Zeigler of Monrovia’s comments against same-gender marriage in April.

In Zimbabwe, President Robert Mugabe, who is Catholic, called homosexuality “inhuman” at an event celebrating Zimbabwe’s independence, according to New Zimbabwe. He also threatened organizations seeking LGBT equality in the country and said he would expel foreigners supportive of gay rights, adding to his viciously anti-LGBT record. In his comments, he appeals to God and Christian faith as justifications for his opposition to homosexuality.

According to the Washington Blade, groups in Zimbabwe claim the dictator uses anti-LGBT rhetoric to shore up political support. With news that Uganda’s President Yoweri Museveni has gained popularity since passing that nation’s harsh anti-gay law, it seems likely that scapegoating LGBT people is a successful political tactic into which Mugabe is tapping.

These are troubling developments, but not isolated incidents, as regular readers of Bondings 2.0 are aware. In light of Pope Francis’ more welcoming tone towards LGBT people, CNN columnist LZ Granderson asks the key question for the rest of us: “will Christians condemn the persecution of gays?” He writes:

“Pope Francis sent shock waves around the globe last July when in addressing the issue of gays in the church, he opted not to remind his 1.6 billion followers about the fiery pits of hell but instead posed a question: ‘Who am I to judge?’ …

“Many followers of Christ may find silence on this topic easier, not noticing silence is being interpreted as endorsement — whether they agree with the anti-gay rhetoric or not. For each time “Who am I to judge?” is asked, an anti-gay quote from the Catholic League’s Bill Donahue is there to answer…

“It was in such silence that laws in Uganda were originally drafted to make being gay punishable by death. Laws that found validation from the ties some Ugandan politicians had to well-known U.S. evangelicals who regularly visited the country. The evangelicals have since distanced themselves from the anti-gay politics of Uganda. Not because of some moral stirring within their soul but because they were called out on it.”

Granderson’s response is simple, yet challenging, and calls on Catholics to end the silence of church leaders. He writes:

“To move Pope Francis’ question from a global headline to global change, Christians must stop allowing silence to be the de facto weapon of choice against the senseless persecution of gay people.”

A good first step is participating in the #PopeSpeakOut campaign, to make your voice heard in Rome and elsewhere for Pope Francis to clearly condemn laws which encourage discrimination and violence against LGBT people. You can find more information on how to take action by clicking here.