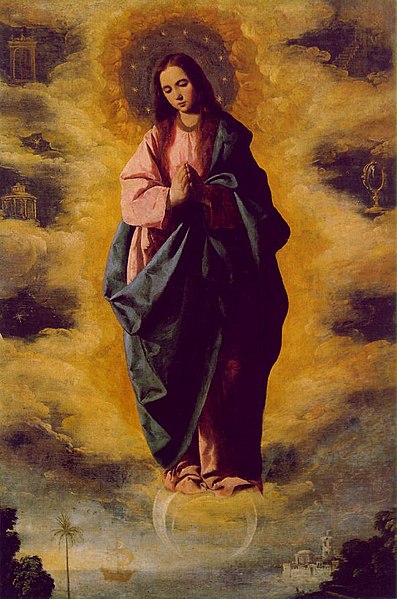 There’s probably not a more Catholic feast day in the liturgical calendar than the Feast of the Immaculate Conception, which is usually celebrated on December 8th, but was moved this year to December 9th because the 8th fell on a Sunday.  It combines so much of the elements that people think of as distinctly Catholic:  devotion to Mary, emphasis on grace, connections between spirituality and sexuality, and religious concepts based on Tradition and not Scripture.

On this day in 2011, Bondings 2.0 focused on the spirituality that LGBT people can gain from this feast.  In 2012, we focused on the spiritual benefits that the entire Church can gain from LGBT people because of this feast. (We’ve created a graphic based on the 2012 post which is included in this blog post–see below.  You can share this graphic directly with your friends through Facebook and Twitter by clicking on one these links:  Facebook & Twitter.)  This year, we’d like to focus a little bit on one aspect of the process of how the dogma of the Immaculate Conception became official teaching.

The dogma of the Immaculate Conception was not declared definitively until December 8, 1854, by Pope Pius IX.  Briefly, the teaching states that Mary was free from Original Sin from the moment of her conception in her mother’s womb.  (It does not refer to Mary’s virginal conception of Jesus.)  One of the things that I find most interesting about this historical declaration is that it acknowledges the role that the sensus fidelium or “sense of the faithful” played in arriving at this teaching.  Pope Pius IX, in Ineffabilis Deus, the papal document which defined the Immaculate Conception, acknowledged that the practice of honoring Mary through this devotion preceded any official teaching of the devotion.  Pius states:

“All are aware with how much diligence this doctrine of the Immaculate Conception of the Mother of God has been handed down, proposed and defended by the most outstanding religious orders, by the more celebrated theological academies, and by very eminent doctors in the sciences of theology. All know, likewise, how eager the bishops have been to profess openly and publicly, even in ecclesiastical assemblies, that Mary, the most holy Mother of God, by virtue of the foreseen merits of Christ, our Lord and Redeemer, was never subject to original sin, but was completely preserved from the original taint, and hence she was redeemed in a manner more sublime. . . .

“This doctrine so filled the minds and souls of our ancestors in the faith that a singular and truly marvelous style of speech came into vogue among them. They have frequently addressed the Mother of God as immaculate, as immaculate in every respect; innocent, and verily most innocent; spotless, and entirely spotless; holy and removed from every stain of sin; all pure, all stainless, the very model of purity and innocence; more beautiful than beauty, more lovely than loveliness; more holy than holiness, singularly holy and most pure in soul and body; the one who surpassed all integrity and virginity; the only one who has become the dwelling place of all the graces of the most Holy Spirit. God alone excepted, Mary is more excellent than all, and by nature fair and beautiful, and more holy than the Cherubim and Seraphim. To praise her all the tongues of heaven and earth do not suffice. . . .

“No wonder, then, that the Pastors of the Church and the faithful gloried daily more and more in professing with so much piety, religion, and love this doctrine of the Immaculate Conception of the Virgin Mother of God. . .”

An important lesson to be learned here is that the process of the development of church teaching begins with how people live out their faith.  For Catholics concerned with LGBT equality, this realization might provide hope for the future.  It helps us to remember that the way we live our lives of faith, the language that we use to express our beliefs, and the seriousness with which we hold our values can have a profound impact on how the institutional Church develops its teaching.  Admittedly, this process can be slow, but it is still powerful and effective.

This message is especially important these days as we seem to have a pope who is willing to listen to the diverse opinions in the Church, particularly on questions of marriage, family, and sexuality.    Pope Francis’ call to bishops to gather opinions on these topics in advance of the 2014 Synod on Marriage and Family provides a great opportunity for Catholics to share the sensus fidelium on these topics with our leaders. As we’ve noted before, it’s important for people to offer their opinions through one of the several online surveys available.  One new addition to this list of surveys is one from Canada from the Grass-roots Catholics for the Synod on Marriage and Family.

As we pray and reflect today on the Immaculate Conception, let’s keep in mind that the way we live our faith lives, and our ability to articulate that lived faith to others, is vital and crucial for how our Church develops its official teaching in the future.

December 8, 2012:  From Secret Shame to Confident Trust: The Immaculate Conception