The case of a Boy Scout being denied Eagle rank because he is gay has made one Commonweal blogger wonder why Catholic  leaders have not spoken out against this injustice. 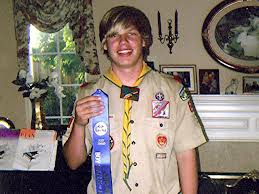 NBCNews.com earlier this month reported the case of Ryan Andreson, a 17-year old Scout from Moraga, California, had completed his Eagle Scout requirements, but his Scoutmaster refused to sign his form:

“. . . the Boy Scouts of America said in a statement that because of Andresen’s sexual orientation and that he did not agree to Scouting’s principle of ‘Duty to God,’ ‘he is no longer eligible for membership in Scouting.’ But the family on Friday disputed that, saying the only reason Andresen was denied the rank is ‘because the Boy Scouts of America has a problem with Ryan being gay.’ “

Commonweal  blogger Lisa Fullam has questioned why Catholic leadership have not spoken out on this case of blatant discrimination.    Since Catholic teaching on homosexuality defends human dignity, Catholic leaders should be forthright on this matter:

“Official Catholic teaching, unlike that of many right-wing evangelical churches, draws a distinction between sexual inclination/desire (the official teaching tends not to use the word “orientation,”) and sexual acts. Homosexual acts are condemned, while homosexual desire is not. I suspect the BSA does not encourage sexual activity for any of its members, but rather encourages them to remain sexually abstinent, at least until marriage or responsible adulthood. (A quick googling didn’t answer this question for me. My searches yielded reports about sex abuse and poor responses to sex abuse within this all-heterosexual group.) Why wouldn’t the Catholic Church want to encourage all interested kids to join groups calling for responsible chastity? Not to mention the fact that scouting might help them find the kind of solid friends that Church teaching says is helpful for gays in dealing with homosexual desire? Catholic magisterial teaching says that no unjust discrimination of any kind should be practiced against LGB people–wouldn’t involvement in a group that helps form responsible and thoughtful men be a good thing for gay kids? (Since I am talking about a response by Catholic leadership here, I am not calling into question the Church’s teaching on same-sex relationships here. There’s no need to change Catholic teaching in order for Church leaders to support scouting for gay kids.)”

Fullam cites another reason that Catholic leaders should speak out on cases like this, and it has to do with a topic that has occupied their minds greatly of late–religious liberty:

“We’ve heard a lot about religious liberty from Catholic leadership this year. Many Christian denominations and other religious groups are supportive of LGBT people and (when appropriate) same-sex relationships. It may well be the case for Ryan–and it is undoubtedly the case for many scouts–that Duty to God as they understand God REQUIRES them to be open and affirming of LGBT people. In their own well-formed consciences, such scouts are put in a difficult position of having to decide whether their membership in a group that excludes gays is in conflict with their promise within that very group to be reverent and to serve God. Wouldn’t a call for an inclusive stance point to the bishops’ sense of the urgency of protecting religious freedom for all and the importance of obeying conscience?”

Fullam’s case is a solid one.  Catholic bishops and other leaders have been shamefully silent on the epidemic of bullying in recent years, and the Andresen case is, at bottom, a case of institutional bullying.  I suspect that Catholic leaders’ obsession with not supporting marriage equality initiatives has made them gun-shy about supporting any initiative that supports LGBT people.  That is not only shameful, but, as Fullam’s argument illustrates, it is a denial of the Catholic Church’s clear teaching on anti-discrimination and religious liberty.   Our youth, and our entire church, deserve better from our leaders.

Ryan’s mother, Karen Andersen, so clearly reflects Catholic principles in the defense of her son quoted by NBCNews.com:

“ ‘I want everyone to know that [the Eagle award] should be based on accomplishment, not your sexual orientation. Ryan entered Scouts when he was six years old and in no way knew what he was,’ said Karen Andresen, 49, a stay-at-home mother of three. ‘I think right now the Scoutmaster is sending Ryan the message that he’s not a valued human being and I want Ryan to know that he is valued … and that people care about him.’ “

Catholic people in the pews can show their support for Ryan Andresen and LGBT youth like him by signing a petition that his mother has organized to secure  his Eagle ranking.

Washington State Resigned Priests Come Out for Marriage Equality Knights of Columbus Donating $$$ and Time to Minnesota Marriage Ban
%d bloggers like this:
Scroll to top