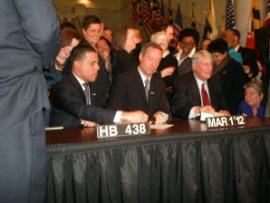 Among the religious and civic leaders attending the signing ceremony was New Ways Ministry’s Co-Founder, Sister Jeannine Gramick.  “I was so proud that our Catholic governor relied on our faith’s tradition of equality and justice for all people, including lesbian and gay people,”  Sister Jeannine said. “It was an honor to participate in this moment, and I’m glad I was there to show the strong support that Catholics have for marriage equality for lesbian and gay couples.”

At the signing ceremony: Governor O'Malley hands the pen he signed to Delegate Maggie McIntosh, a lesbian. Sister Jeannine can be seen cheering in the white box .

O’Malley prefaced his signing of the bill with a statement which reverberated with Catholic social teaching:

“For a free and diverse people, for a people of many faiths, for a people committed to the principle of religious freedom, the way forward is always found through greater respect for the equal rights of all, for the human dignity of all.

On behalf of Catholics, New Ways Ministry thanked Governor O’Malley and the Maryland legislature in ad appearing in today’s print edition of The Baltimore Sun:

Equally Blessed, the coalition of Catholic groups that support equality for LGBT people in the church and wider society, released this statement today on the signing of marriage equality legislation in the state of Maryland:

“We are deeply gratified that Governor Martin O’Malley has joined fellow Catholic governors Andrew Cuomo of New York and Christine Gregoire of Washington in signing marriage equality legislation into law.

“These governors represent the sentiments of Catholics in this country far better than the church’s hierarchy, which has spent millions of dollars in an increasingly futile campaign to prolong the era in which secular governments actively discriminate against same-gender couples and their families.

“We applaud Governor O’Malley and the state legislators who recognized that every human being, regardless of sexual orientation, is created in God’s image, and must be treated with dignity and respect by their neighbors and their government, and we pray that some day such an understanding will take root among the bishops of our church.

“As a coalition we were honored to work of behalf of marriage equality in Maryland by placing an op-ed in The Washington Post making the Catholic case for same-gender marriage. In addition, three coalition members, Sister Jeannine Gramick and Francis DeBernardo of New Ways Ministry, and Allen Rose of DignityUSA testified before the House of Delegates.

“We are particularly thankful to Governor O’Malley, who distributed copies of Mr. DeBernardo’s booklet, Marriage Equality: A Positive Catholic Approach, and who will be attending New Ways Ministry’s Seventh National Symposium on Catholicism and Homosexuality, March 15-17 in Baltimore.

“It is fitting that Sister Jeannine, one of the most effective advocates for LGBT people in the church, will be participating in today’s signing ceremony.”

For more news on the signing ceremony, check out these articles:

Is It Possible to Find Hope in This Week's Painful News? Three Catholic Leaders Offer Responses to Maryland's Marriage Equality...
%d bloggers like this:
Scroll to top