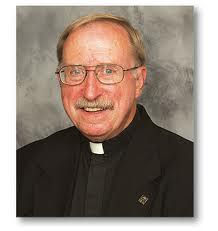 Father Howard Hall, one of the pioneers of LGBT ministry in the Catholic church, has passed away from pancreatic cancer.  Fr. Hall was instrumental in developing diocesan ministry to LGBT people in Baton Rouge, Louisiana, and he was involved in the work of so many of the national Catholic organizations that work for justice and equality for LGBT people:  Catholic Association for Lesbian and Gay Ministry, New Ways Ministry, Fortunate Families, and Dignity.

I had the pleasure of meeting Howard on several occasions over the years, and he was always a gentle and joy-filled presence.  My greatest memory of him comes from the summer of 2000 when I spent two weeks doing New Ways Ministry workshops in Louisiana, Mississippi, and Alabama.  Howard was instrumental in helping us set up and promote the workshop I conducted in his hometown of Baton Rouge.  It is a testimony to the great groundwork that he did there that this workshop was one of the best attended that I have conducted in 18 years of this ministry.

Like many people, I will remember Howard for his great kindness and generosity.  While I was planning that trip to the Gulf Coast, Howard realized that it would be a grueling schedule for me, as I spent each day traveling and doing a program for almost two weeks straight.  To alleviate the stress, Howard offered me use of his small cabin in the countryside not far from Baton Rouge for two days of solitude and silence.  It was a modest, cozy place, and I’ll never forget the peace that I experienced there or the generosity of the priest who provided it.

Howard’s accomplishments in LGBT ministry are many.  He helped establish a Dignity chapter in Baton Rouge in 1973, one of the first chapters outside of California.  He served on the board of CALGM in the early years of its formation when it was known as the National Association of Catholic Diocesan Lesbian/Gay Ministries (NACDLGM).  In 2005, when the Vatican advised against accepting gay candidates to seminaries, Howard wrote to the directors of clergy formation and education in every U.S. diocese, urging them to practice caution in applying this hurtful directive.

A long list of his involvements and accomplishments can be read on his profile on the Lesbian, Gay, Bisexual, and Transgender Religious Archives Network website.

Howard will be greatly missed by all who have worked in LGBT ministry in the Catholic church. We are comforted knowing that we now have a new saint in heaven to whom we can pray for justice and equality in our church.