A new book, Pope Francis has spoken out on a variety of topics from his personal development to many issues facing church and state.   Not surprisingly, LGBT topics were mentioned, and not surprisingly, the pope’s statements are a mixed bag.

The book, entitled Politics and Society, is a series of 12 conversations between the pope and Dominique Wolton, a French sociologist.   Crux carried a string of excerpts from the book on his visits to a psychoanalyst, the role of the laity, colonial exploitation, and, of course, same-gender marriage and gender identity.   On the last topic, the excerpt reads: 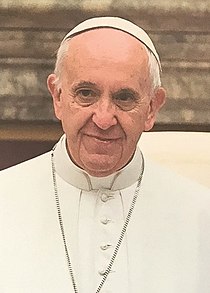 “Marriage between people of the same sex? ‘Marriage’ is a historical word. Always in humanity, and not only within the Church, it’s between a man and a woman… we cannot change that. This is the nature of things. This is how they are. Let’s call them ‘civil unions.’ Lets not play with the truth. It’s true that behind it there is a gender ideology. In books also, children are learning that they can choose their own sex. Why is sex, being a woman or a man, a choice and not a fact of nature? This favors this mistake. But let’s say things as they are: Marriage is between a man and a woman. This is the precise term. Lets call unions between the same sex ‘civil unions’.”

For the most part, this section is not surprising.  On many occasions, Pope Francis has stated his opposition to marriage for lesbian and gay people.   And he is also on the record for being negative towards new understandings of gender identity, though positive about welcoming transgender people.

What’s new here, however, is his endorsement of civil unions for same-sex couples. Although many church leaders have suggested supporting such an arrangement in recent years, Pope Francis has never, as pontiff, stated his endorsement of civil unions so flatly.   (He did support civil unions as a compromise to his opposition towards marriage equality when he was an archbishop in Argentina.  As pontiff, he did make an ambiguous statement about civil unions, which inspired  more questions than certainty about his position.)  This new statement of support from him  is a giant step forward. What is significant here is that he is agreeing to the importance of some sort legal recognition of civil unions for lesbian and gay couples. I don’t think he will be campaigning for such legislation, but it sure sounds like he is comfortable with them and that he won’t be blocking them.

Most troublesome, though, is his continuation of promoting the idea that children are being taught to choose their sex or gender.  He has said such before, but in all the material I have read on transgender issues and education about gender, I have never seen any evidence that children are being taught such a notion.  In fact, it goes against what most transgender people say of their experience which they describe as a discovery of a discrepancy between their internally experienced gender and their external physical bodies.  “Discovery” is a very long way from “choice.”

Moreover,  I don’t know of any educational programs that discuss gender with children before it is educationally and psychologically appropriate to do so.

So, once again, Pope Francis both progresses and regresses on LGBT issues.

“The Nashville Statement” Reveals Just How Far Catholic LGBT Issues...British Catholics Host Gathering on LGBT Issues in the Church
Scroll to top
%d bloggers like this: