When the Archbishop of Denver announced recently that Catholic Scout groups in his archdiocese need to conform to Catholic principles of morality, he referred to the idea of winning and losing.  That kind of attitude reveals a big part of the problem with some Catholic opposition to LGBT issues. 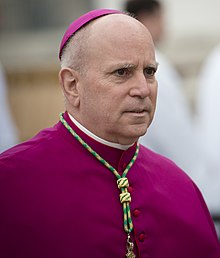 Archbishop Samuel Aquila wrote a column for the April 20th edition of The Denver Catholic in which he announced that despite the Boy Scouts of America’s recent decision to allow transgender scouts, based on local troop decisions, the Archdiocese of Denver was not going to disaffiliate from scouting programs altogether.  Instead, the archbishop would allow each sponsoring pastor to decide about sponsoring a scouting program.  Aquila stated:

“Ultimately, the decision for a parish to charter or affiliate with a scouting organization falls under the authority of the pastor, who must weigh the risks this could present to his parish. I ask for all those involved in Catholic scouting to respect the decisions made by their pastors.”

However, while allowing local autonomy, the archbishop also outlined some “requirements” which Catholic scouting leaders must follow.  Included among these were:

“Refrain from approving, promoting or engaging in any conduct or lifestyle considered to be in contradiction with Catholic doctrine or morals.

“Promote the dignity of the human person and expressions of human sexuality that accord with the natural law, and therefore with Catholic teaching.”

For the scouts themselves, they must:

“Refrain from conduct or living a lifestyle considered to be in contradiction with Catholic doctrine or morals.”

Although not stated outright, from the tone of the rest of the column, it is easy to presume that the archbishop is referring to LGBT issues and people with this language, though not exclusively. Without stating it directly, the archbishop is forbidding gay or transgender leaders or scouts from participating in Catholic troops.

That, in itself, while disappointing, is not surprising.  Other Catholic leaders had already made similar announcements when the Boy Scouts changed their policies on gay and transgender scouts and leaders.   What caught my eye, however, was the archbishop’s use of the language of winning and losing in regard to scouting policy changes.

In defending his decision not to disaffiliate totally from scouting programs, Aquila stated:

“I believe that disaffiliation, while it makes a strong statement, would make a winner out of the secular culture and its agenda, and losers out of the Boy Scouts and the Church.”

Does he really need to see it as a zero-sum game, where one side wins and one side loses?  That kind of thinking is not the way of reconciliation.  It is not the path of accompaniment and encounter.   Thinking in terms of winning and losing is a strategy that will continue to marginalize the Catholic Church in regard to mainstream society.  This kind of thinking is “culture war” thinking.

What the archbishop misses is that in banning LGBT scouts and leaders from Catholic groups, he is shutting the door on so many more people than he realizes.  The chill from his decision is going to turn people away from the Catholic Church, not lead them toward it.

Denverite.com reported the reaction of Rex Fuller, spokesperson for the GLBT Community Center of Colorado, who saw both good and bad in the archbishop’s decision:

“Obviously, we want to promote all aspects of society to be as accepting and welcoming as possible. It’s positive that they’re saying they’re not going to try to challenge the Boy Scouts over the Boy Scouts’ policies, but it’s unfortunate that they still have very restrictive and not-accepting policies inside the church.

“I think that there are certainly lots of gay and lesbian and transgender Catholics in the world that wish they were more accepting. But progress is slow. I think this is a small step, at least, in the right direction.”

I wish I could be as optimistic.  While I recognize that Aquila wants to maintain the Catholic identity of parish scouting programs, I have to wonder if he is really doing so if he is promoting principles such as exclusion and doctrinal tests.  Why do conformity to teachings on gender and sexuality always have to trump any other Catholic principles in pastoral decision-making?

If Catholic leaders continue to see all encounters with other cultures as problems in which there is a winner and a loser, then ultimately, the Catholic Church will end up as the ultimate loser.  It will lose not only its people but its soul, too.

Theologian’s Autobiography Explains His Gay JourneyFired Gay Minister: “Archbishop has done us and all the church a great...
Scroll to top
%d bloggers like this: