A New Jersey Catholic school’s motion to dismiss the discrimination lawsuit it faces from a fired lesbian employee has again been dismissed. 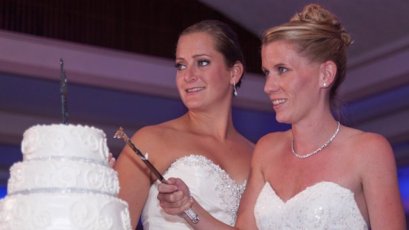 The motion, filed by co-defendants Paramus Catholic High School and the Archdiocese of Newark, was denied by a New Jersey state appeals court. This means a lawsuit filed against them by former Paramus Catholic dean Kate Drumgoole can proceed.

Drumgoole sued the school in August after being fired earlier this year when the archdiocese became aware of her same-gender marriage with Jaclyn Vanore. NJ.com reported:

“[Drumgoole] alleges she was discriminated against by the archdiocese, the school and its president after it was revealed that she was married to a woman.

“The school admitted in a legal motion that she was fired because of her marriage, but argued it didn’t violate state rules because church employees must abide by the Catholic faith.”

This is the third time a joint Paramus Catholic-Archdiocese of Newark motion to dismiss the lawsuit has been rejected by New Jersey courts.

In October, a judge rejected the argument that the defendants were exempt as religious institutions from the New Jersey Laws Against Discrimination (NJLAD), saying a ruling on whether such an exemption applies could not yet be made.

The case will likely come down to whether Paramus Catholic and the Archdiocese are exempt from the states’ employment non-discrimination exemptions, based on whether Drumgoole is legally considered a minister. The defendants have admitted outright that Drumgoole, a former guidance counselor and basketball coach, was fired because she entered a civil marriage with her wife.

The discovery period which can now finally proceed will allow for a determination of whether the exemption applies or not. A finding may be quickly followed by a resolution.

A recent editorial from The Record said it seems as if Kate Drumgoole’s discrimination suit “has been going on for years, but in reality, it has only barely begun.” The editors commented further:

“Whether Drumgoole’s team can prove its case – although we have held she should not have been terminated – Drumgoole’s case deserves to be heard in a court of law. Individuals who believe they have been wrongfully terminated have the right to seek legal redress, to take their case to a court, to have the justice system weigh the merits.

“Despite efforts by the school and the archdiocese to seek dismissal, a Superior Court judge, and now a state appeals court, have both concluded that Drumgoole’s case has enough merit to keep moving forward. Only by proceeding to discovery can a clearer picture begin to be drawn in the case of an abrupt firing of someone who, from all appearances, seemed to be a model employee and representative of the school.”

Drumgoole’s case sparked a number of related controversies in the local Newark church this fall. Fr. Warren Hall, an archdiocesan priest, was suspended from priestly duties in part because of his support for Drumgoole.  The school’s principal was suspended from work for a few days, and the school’s president still remains suspended. Over 3000 school community members signed a petition protesting Drumgoole’s firing.

A particularly troubling aspect of this firing is that church officials only became aware of the marriage after an estranged family member of Lenore’s sent photos of the couples to them. Drumgoole’s job description does not seem ministerial, and it would seem fitting that she be protected by LGBT non-discrimination laws. Whatever the court’s ruling, it will not change two facts. First, church officials allowed a family wound to be exploited by them to cause further harm. Second, they are defending their discrimination against an LGBT person by claiming a religious exemption. While that maybe legally correct, the Catholic tradition does not support such discrimination.

Instead of waiting on a court’s ruling, Newark’s new Cardinal Joseph Tobin should end the legal defense, admit a discriminatory mistake was made, apologize to Drumgoole, her wife, and Catholics generally, and see how reconciliation can now be attained. Such actions initiated by Tobin, who was appointed by Pope Francis, would be a clear indication that the exclusionary style and actions of his predecessor, Archbishop John Myers, are no more. And that is Good News which Newark’s Catholics very much need to hear this Christmas.

For Bondings 2.0‘s full coverage of this story, and other LGBT-related church worker disputes, click the ‘Employment Issues‘ category to the right or here. You can click here to find a full listing of the more than 60 incidents since 2007 where church workers have lost their jobs over LGBT identity, same-sex marriages, or public support for equality.