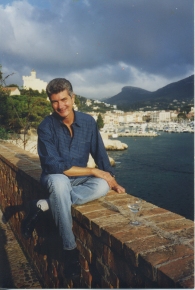 Today’s post is by William di Canzio, a playwright  who has taught at Smith College, Haverford College, and Yale University. At Yale, he was also appointed dean of Trumbull College, academic director in residence to four hundred undergraduates. He has published essays in Commonweal magazine. He holds a PhD  from Johns Hopkins University and MFA from the Yale School of Drama, where he was awarded the Eugene O’Neill scholarship in playwriting. He now teaches in the Pennoni Honors College of Drexel University, Philadelphia.

A week ago Saturday the abbot of Daylesford Abbey, a Norbertine community near Philadelphia, emailed me requesting a meeting; he said he would rather not disclose its purpose. A few days later we met for coffee. Abbot Richard Antonucci started our conversation by saying that he’d heard that Jim Anderson and I had been legally married. “I want you to believe this,” he said: “I sincerely
wish you many, many years of happiness together.”

Then he passed me a copy of a directive from Archbishop Charles Chaput of
Philadelphia stating that members of same-sex couples should “not hold
positions of responsibility in a parish, nor should they carry out any liturgical
ministry or function.” Richard said he intended to enforce the directive.

Our talk was frank but friendly. I reminded him that the abbey is not a parish
and nor is Chaput his superior. True enough, but, Richard tells me, all Catholic
laypeople in the archdiocese are subject to Chaput’s authority.

I argued that I knew of local pastors choosing not to enforce the directive because
of its injustice. Richard said he was unwilling to take the risk.

“You’re the spiritual leader of the place I’ve been part of for thirty-five years,” I
said. “How do you counsel me?”

Richard said that he hoped I might find it in my heart to remain in the abbey
community.

The pain of this decision can only be felt where there is love. Here’s why it
hurts: when I first came to Daylesford Abbey in 1981, I had just undergone what
I later learned is called a conversion. Raised Catholic, educated in a parish
school and at Jesuit prep school, I’d become disaffected with the church in
college. Then, at 30, I got knocked off my horse and struck blind, so to speak,
and returned to a church much different from the one I’d known as a kid. My
discovery of Daylesford Abbey, with its refined architecture, enlightened
preaching and ravishing liturgy, was a revelation within the revelation. Though
I’d never seen the place before, when I entered its church for the first time, I had
the uncanny feeling that I’d come home.

In those early days, the abbey’s liturgical director befriended me and put me to
work immediately on special projects: revising a hymnal with an eye to
amending sexist language; arranging a psalter and canticles to be used in the
Daylesford Rite of the Hours. We likewise collaborated on liturgical events—the
consecration of the Abbey’s Church of the Assumption, a children’s mass for
Christmas morning, and the Good Friday Veneration of the Cross, a service that
has since become Daylesford’s signature. From the beginning, even before
lectoring, mine has been a ministry of words.

Even during the many years I lived in New Haven, I kept close to the Abbey. I
was commissioned to write a three-year cycle of penitential rites for its
Sunday mass based on the scriptural readings for the day. In 1988 I became an
Affiliate (one considering entering the order); in 2001, an Associate (a layperson
with an especially active role in the abbey’s life). During the declining years of
my parents (who loved the place), the Abbey was a source of solace to me as
caregiver. Two Norbertines celebrated my father’s funeral.

Lectoring has been a particular passion for me. On my conversion, I was drawn
to the lectern because of the beauty of what I heard and my desire to know it
better. A writer myself, I prepare my assignments as if I had written them, so
that I can present them to the assembly with understanding and conviction.

Forgive me if this sounds like a resume. My point is Charles Chaput knows none
of this about me. Richard himself, who came to Daylesford in 2000, did not
know how very long is my history there. Neither of these men knows that Jim
decided to be confirmed a Catholic after attending Pentecost mass at Daylesford,
though Richard remembered fondly Jim’s magnificent chanting of the Passion
narratives, solo, from the Abbey pulpit on three consecutive Palm Sundays and
Good Fridays.

My meeting with the abbot on October 20 was not my first encounter with
the episcopal directive. I’d read about it in the news some months before. Of
course it made me angry: it’s very offensive. Chaput asserts that same-sex
couples “offer a serious counter-witness to Catholic belief, which can only
produce moral confusion in the community. Such a relationship cannot be
accepted into the life of the parish without undermining the faith of the
community, most notably the children.”

This strikes me as hypocritical, perhaps even cynical, especially the phrase
concerning children: we remember that Benedict XVI appointed Chaput to
Philadelphia in the midst of the legal consequences of disclosures of the history
of clerical pedophilia in the archdiocese.

In his administration, Chaput has crossed a line into alienating the laity whom he
was entrusted to serve. He has advocated, even lobbied, against extending the
Pennsylvania commonwealth’s statute of limitation on crimes of sexual
predation. Perhaps alienation is a deliberate strategy: like the failed pope who
appointed him, the archbishop has spoken publically about the advantages of a
“smaller, lighter” church.

Since my meeting with Richard, I’ve gone through several phases of grief:
betrayal, anger, self-pity, sorrow, and worst, I realize now, was a sense of shame
and disgrace. These latter emotions are what victims of abuse are made to feel in its aftermath, but they’re also familiar to gay men of my age. And I thought I was done with those—years and years ago.

For Bondings 2.0‘s full coverage of other LGBT-related church worker and parish volunteer disputes, click the ‘‘Employment Issues‘ category to the right or here. You can click here to find a full listing of the more than 60 incidents since 2007 where church workers or volunteers have lost their positions over LGBT identity, same-sex marriages, or public support for equality.

Pilgrimage of Mercy Stressed Reconciliation Between LGBT People and Bishops Prayer Vigil Will Remember Orlando Victims & Call on Bishops to Speak ...
%d bloggers like this:
Scroll to top