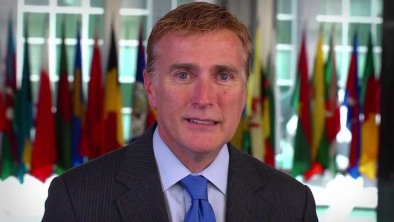 Catholic Church leaders’ attacks against gay U.S. Ambassador to the Dominican Republic James “Wally” Brewster continue unabated, and reveal a troubling weak spot that Pope Francis must address in regard to LGBT issues .

Bishop Victor Massalles, the auxiliary bishop of Santo Domingo, Dominican Republic, told Crux, that Ambassador Brewster was “abusing power” by advocating for LGBT rights in the Caribbean nation.  Such advocacy, however, is not a pet project of Brewster’s, but is entirely consistent with U.S foreign policy.

” ‘He’s not an ambassador, he’s a gay activist and we’re suffering [from] him as a nation, as a culture, as a country that has its own uses and customs, and its own laws. . .He’s trying to take [away] our right to national self-determination.’ “

Massalles admitted, though, that his claims about U.S. government coercion are “suspicions” rather than facts. He also defended use of an anti-gay slur against Ambassador by Cardinal Nicolás de Jesús López Rodríguez in 2013, saying not allowing “an old man to express himself like an old man” would violate the cardinal’s rights.

The bishop’s criticism is but the latest attack from Catholic officials who, since Brewster was appointed in 2013, have issued regular and intense attacks against him. The Dominican Episcopal Conference condemned the ambassador in a March 2016 letter, citing Pope Francis’ concept of ideological colonization. Additionally, a Catholic high school in the capital posted signs this year banning Brewster and his husband, Bob Satawake, from its campus.

Worst of all have been comments by Cardinal López, the leading prelate in the DR. He said previously that Brewster was “wife to a man” and should stick to housework. In 2013, López used an anti-gay slur, and he said Brewster should “take his gay pride elsewhere.”  The Washington Blade reported that López once described LGBT tourists as “social trash” and “degenerates.” Cardinal López’s remarks made Bondings 2.0’s lists of Worst Catholic LGBT News in both 2013 and 2015.

These Catholic attacks are not just aimed at Brewster and Satawake but all LGBT Dominicans, wrote Executive Director of Diversidad Dominicana Rosanna Marzan. She explained in the Washington Blade:

“Those using hateful rhetoric against the ambassador have specific objectives. Among them, to quash the efforts that we as Dominican LGBT civil society activists have undertaken to defend ourselves against the hateful, violent and stigmatizing discourse orchestrated by hierarchies within the Catholic and Evangelical churches and the conservative individuals who support them. . .

“LGBT Dominicans face the threat of violence and hate crimes as well as discrimination in essential services, including healthcare, employment and housing. Impunity is the norm for violations against LGBT people. . .The attacks on Brewster are also attacks on us.”

What is troubling about Bishop Massalles’ latest remarks and the episcopal conference’s March letter is that both cited Pope Francis to justify attacks on Brewster and his husband. What has happened in the Dominican Republic has not been about disagreements over policies or theologies. It has been an unceasing and vicious attack against a human being by the institutional church, an attack which causes broader harm.

When writing about church officials’ attacks against Ambassador Brewster, Bondings 2.0 has repeatedly said papal intervention by Francis is necessary and appropriate –even as he tries to decentralize the Church. Intervention now seems more necessary since anti-LGBT church leaders now cite the pope specifically to justify their prejudice and desired discrimination. There is no justification for prejudice, especially when it is so publicly displayed and when it contributes to human suffering. It is incumbent on Pope Francis to make that clear. At this point, to not do so will cause LGBT advocates and others to question papal intentions about respecting every person’s dignity.

Proudly Blogging Catholics—Sharing the LGBT Good News: A Trans-Atlantic ... Pope Francis on LGBT Issues Is Out of Sync with Amoris Laetitia’s Overall...
%d bloggers like this:
Scroll to top