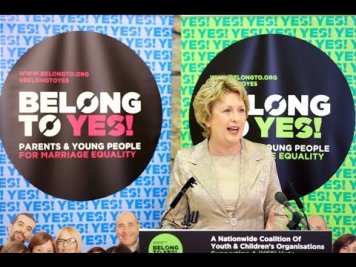 As wedding bells begin ringing for the first time for same-gender couples in Ireland this month, former Irish president Mary McAleese spoke with The Irish Catholic about her support for marriage equality in the referendum and, more broadly, the Catholic faith which drives her pursuit of LGBT rights.

McAleese, whose son is gay, explained her decision to publicly endorse marriage equality by saying:

“My views are founded emphatically in the Gospel. . .What infuses me, what is the essence of my being, is my faith in Christ. And it is the love of Christ and his offer of mercy to the world, the sense that every single person is a child of God, it is that which infuses me, gives me the outlook I have on the world. . .[That] is the outlook I have on our gay citizens.”

To not have spoken out “would have been an act of craven and unchristian cowardice,” McAleese added. She is “ashamed” that the church has not advocated LGBT rights and said it has been “a major conduit for homophobia which is toxic, a form of hatred that has nothing to do with Christ and is unchristian.”

McAleese was equally clear in her criticism of current church teachings on homosexuality, about which she stated:

Looking forward, McAleese envisioned a Catholic Church that is more affirming of LGBT justice and inclusion even if it avoids the marriage question. How would the church be a “champion of gay rights”? McAleese explained:

” ‘That would be very simple. It [the Church] wouldn’t necessarily have to be a champion of gay marriage. I’m quite happy for the Church to stay away from civil marriage and let the State provide for that – that is not the issue.’

“It would mean ‘not adhering to views from the Old Testament about homosexuality, which have long since been discredited by medical science’ and being ‘actively engaged in today’s world with all the information that it has [about homosexuality.]’

” ‘It would mean looking at the language that the Church uses to see whether that language is capable of hurt, and of conducing to homophobia, which it most certainly does.’ “

McAleese closely tied magisterial language about homosexuality to homophobia’s proliferation in the world, calling the church to “take responsibility for the extent to which its words and its language conduces to homophobia.”

“The target of such language is entitled to reply and say how they feel when they hear those words and if they say those words make them feel hated, belittled or instil fear in them then those who utter those words in the first place have to listen very carefully.”

McAleese also commented on Pope Francis, whom she described as “the most intriguing Pope of my lifetime” and praised him for inviting open discussion in the church. She said:

“[Francis’] wonderful gift to the Church is to welcome the debate that has been going on any way in all the quiet spaces where two or more were gathered, and festering in frustration, and he has just let it out and that is a joy. . .I think Francis is allowing the Church to breathe and that is a wonderful thing.”

In a related story, Archbishop Charles Brown, the Apostolic Nuncio to Ireland, also commented on the referendum, according to The Irish Times. He said the nation’s bishops “did an excellent job in presenting in a compassionate, convincing way the teaching of the church on this issue.” Brown’s assessment that the bishops were convincing seems off base, given the many same-sex weddings that took place last Monday, the first day such ceremonies were legal, thanks to the May 2015 referendum.

More convincing has been the witness of faithful Catholics like Mary McAleese, preaching joyfully a message of reconciliation and justice consistent with the Gospel.

McAleese’s interview reveals a lay Catholic thinking critically about her faith and how it relates to our world. She is highly attentive to church teaching (and history), yet remains foremost committed to her conscience. Thought-provoking and inspiring, her words are worth reading in full, which you can do here.

Want to celebrate marriage equality in Ireland? Consider “Ireland: Land of Rainbows and Wedding Bells,” an LGBT-friendly pilgrimage with Sr. Jeannine Gramick in April 2016. You can find more information here.

Church Workers Speak Out, Backed by 1,000+ Catholics at Call To Action Meet... USCCB Voting Guide Retains Focus on Marriage, Against Protests by Some Bish...
%d bloggers like this:
Scroll to top