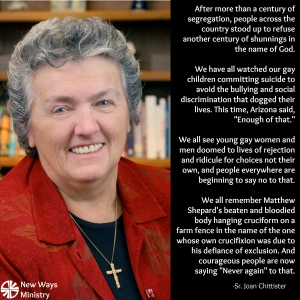 Sr. Joan Chittister, a renowned Catholic nun, author, and advocate for social justice, wrote about anti-LGBT discrimination in a recent column for the National Catholic Reporter. In it, she parsed out the two types of religious believers which have existed throughout history and challenges Catholics to stand on the right side of history.

Chittister begins by laying out these two types of religious thinking:  the ‘Do unto others as you would have others do unto you’ kind and the ‘Get thee behind me, Satan’ kind. In this dichotomy, the former welcomes people in and the latter pushes people out. Of the latter kind, she writes:

“Some people have lived restricted lives and even died at the hands of those who sought to restrict them — some for trying to eat at white lunch counters or sitting down on buses; some for having ancestors in Jerusalem 2,000 years ago; some for serving soup that was cold or not ironing the shirts right.

“The important thing to remember is that it doesn’t really matter how the transgressions were defined. What matters is that the arguments in defense of doing it were always the same: God didn’t want mixed races, or God wanted women to obey men, or God wanted Jews punished because the Romans crucified Jesus. Go figure.”

Those who wish to discriminate against LGBT people upon religious grounds are the most recent group of exclusionary believers, who Chittister calls “just as deadly.” Having learned nothing from past discrimination and segregation, those sponsoring anti-gay laws in Arizona and elsewhere are seeking to use religious liberty as the justification for their discrimination. In response, the ‘Golden Rule’ believers are standing up to religious-based prejudices. Chittister writes:

“After more than a century of segregation, people across the country stood up to refuse another century of shunnings in the name of God.

“We have all watched our gay children committing suicide to avoid the bullying and social discrimination that dogged their lives. This time, Arizona said, ‘Enough of that.’

“We all see young gay women and men doomed to lives of rejection and ridicule for choices not their own, and people everywhere are beginning to say no to that.

“We all remember Matthew Shepard’s beaten and bloodied body hanging cruciform on a farm fence in the name of the one whose own crucifixion was due to his defiance of exclusion. And courageous people are now saying ‘Never again’ to that.

“So now, the exclusionists whose ‘religion’ defies the very principles of the God who created the others as well as themselves are working again to sequester and silence those who are other than themselves. And all for simply wanting to share the services the rest of us take for granted in the public square.”

Questioning what the future looks like for all people in a country where discrimination for anything using religious justifications becomes law, Chittister concludes:

“From where I stand, I would caution against complacency about this issue. After all, there are already other states with movements to write ‘moral’ discrimination into law under the guise of ‘religious freedom,’ among them, Georgia, Hawaii, Idaho, Mississippi, Missouri, Ohio, Oklahoma, Oregon and Utah.

“After all, the next time, you may be what someone considers ‘morally offensive to their deeply held religious convictions.’ Just as were Jews, Catholics and blacks to the Ku Klux Klan in the United States. Or gypsies to the Nazis. Or now, homosexuals in Uganda. All of them by very religious people, they tell us. The other kind.”

You can read the article in full by clicking here.  New Ways Ministry salute and thanks Sister Joan for this insightful and penetrating analysis.