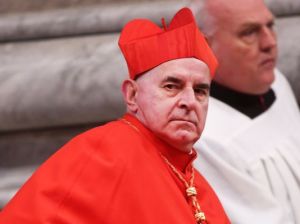 While the Catholic world’s focus is on the conclave in Vatican City, it might do well to remember one prelate who is not there: Cardinal Keith O’Brien of Scotland.  As Bondings 2.0 reported last week, O’Brien resigned as archbishop of St. Andrews and Edinburgh because of credible allegations of sexual misconduct raised by three priests and one resigned priest.

O’Brien apologized for his behavior, and it seems that his apology–and the entire crisis–has brought about two interesting responses in Scotland.  The first is from Kevin Crowe and Simon Long, two gay Catholic men from Durness, who urged forgiveness for O’Brien.  They recently wrote the following letter to the editor in Scotland’s The Herald newspaper:

As gay Catholics, we have long campaigned for a more inclusive attitude from the church.

On several occasions, we have publicly expressed our disagreement with the stance taken by the church and in particular the intemperate language used on occasions by Cardinal Keith O’Brien.

However, we take no satisfaction from the revelations about his past sexual behaviour and the resignation that followed (“‘Sexual conduct fell below standards expected of me'”, The Herald, March 4). Our major emotion is one of great sadness.

It is not uncommon for those who are in the closet to attempt to convince others of their heterosexuality by being virulent in their opposition to gay equality. Did Keith O’Brien follow this path?

He has asked for forgiveness for his failings. This forgiveness should be forthcoming – from Catholics and from gay people. Rather than condemning him, we should try to understand the pressures and forces that led him to make statements that could be seen as hypocritical. And we should remember that, on many other issues, he was considered to be a liberal.

If the Catholic Church begins the process of examining the harm caused by its dogmatic stance on sexual matters, then some good will have come out of this sad sequence of events.

We hope that in his retirement Keith O’Brien will find peace and happiness. Judgment we leave to God.

A little more complicated response comes from Peter Kearney, the former spokesperson for Cardinal O’Brien.   Kearney seems to acknowledge that the church under O’Brien’s leadership was not pastoral enough to gay and lesbian people.  However, the remedy he offers falls short of the mark.   The Scottish Express interviewed him, and he offered the following comments:

“Mr Kearney admitted more needs to be done to provide support for Catholics struggling with their sexuality.

“ ‘The truth of it is that that level of support really isn’t there.

“ ‘If you’ve got a drug, or alcohol problem, or homelessness, then we seem to be able to step in and offer you support, help and options. But when it comes to human sexuality, it just isn’t there at the moment. And that’s unfortunate.’ ”

Of course, Kearney is correct in saying that pastoral outreach seems absent in the Scottish church, and that people need support in the area of human sexuality.  Unfortunately, his negative appraisal of gay and lesbian people indicates that the kind of guidance he would want to offer would probably be more harmful than helpful.

Not all gay and lesbian people struggle with their orientation or have any confusion about it once they have accepted it.  Indeed, I would venture that most gay and lesbian people have come to a place of self-affirmation, sometimes against incredible odds.  A “compassionate, pastoral context” that Kearney mentions would be one that built upon this affirmation, not one that would cause people to develop negative evaluations of themselves.

Yes, more needs to be done pastorally for gay and lesbian people, but that “more” has to be positive and affirming, reminding them of God’s unconditional love for all.

The example of forgiveness from Kevin Long and Simon Crowe is a testimony to the fact that the entire church can learn a lot about God’s unconditional love from gay and lesbian people.

Papabile Rumors and Keeping Perspective About the ConclaveNew Ways Ministry Statement on the Election of Pope Francis
Scroll to top
Loading Comments...
%d bloggers like this: