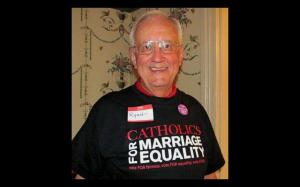 As the campaign for marriage equality in Maryland winds down, there is layman whose enthusiasm and generosity has buoyed the spirits of all those working in this states’ Catholics for Marriage Equality campaign: Ryan Sattler.

Sattler is profiled in this week’s National Catholic Reporter, focusing on the work he as done in the past seven months to mobilize Catholics in Maryland to get out and vote for the marriage equality referendum on Election Day.

The NCR profile describes Sattler’s motivation for his untiring work:

“Ryan Sattler, 68, thinks about his sister Mary every day. The youngest of four siblings, Mary was ‘the darling’ of their close-knit Catholic family. She was barely a teenager when she told Ryan’s wife, Joan, and later Ryan himself, that she was gay. It was difficult for Mary’s parents to accept at first, but Ryan says their ‘fierce love’ for her helped them overcome their initial shock and disappointment.

“Ryan worried about his sister, who never seemed entirely happy. He overheard her lying about nonexistent boyfriends, even while living with her partner.

” ‘She was afraid people wouldn’t accept her as she was. She couldn’t be herself,’ he said.

“When her long-term relationship ended, Mary felt she had nothing — not the heterosexual life she’d been lying about and not the life she was building with her partner. She began drinking heavily and taking pills, and shut out her family’s repeated offers to help. Five years ago, she took her own life.

“There are many reasons why Ryan supports Maryland’s ballot referendum on marriage equality. But first and foremost, there is Mary.”

Sattler, who is also a board member of New Ways Ministry, has spent the last half-year organizing events, raising funds, staffing phone banks, and participating in countless meetings to help mobilize the Catholic vote in Maryland.  His pastor commented on his energy and spirit:

” ‘Ryan is a good, faithful Catholic,”‘said Fr. Joe Muth, his pastor at St. Matthew Catholic Church in Baltimore. ‘He and others have tried to encourage thoughtful discussion about same-sex marriage at our parish. People want to talk about their beliefs and seek truth with compassion — it’s not necessarily healthy to shut down those conversations.’ “

And Ryan has not been alone in his work (though many of those who have become involved have done so because of his enthusiasm and encouragement):

“Ryan estimated that there are more than 1,000 Catholics statewide working to pass the referendum. According to Karin Quimby, deputy faith director of Marylanders for Marriage Equality, Ryan and other Catholic lay leaders have been “very effective” at the regional level.

” ‘Catholics like Ryan are active in this campaign because of their faith,’ she said. ‘They have a deep need to speak out about justice and equality.’ “

Ryan’s faith as a Catholic goes deep, beyond the question of marriage equality:

” ‘The church has given me God’s love, God’s true presence,’ he said. ‘When I receive the Eucharist, I’m not thinking about the bishops. I receive the body and blood of Jesus, who loves me and welcomes all people to his table — the same Jesus who is asking me to do what I can to feed the hungry, help the poor, love my neighbors. I know that I need a relationship with him and that I need to share his love with others. That’s why I’m Catholic.’ “