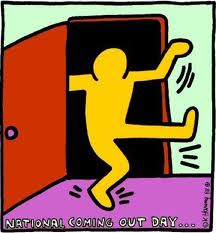 Today is special for two reasons.  For the LGBT community in the United States, it is National Coming Out Day.  For the Catholic community worldwide, it is the 50th anniversary of the opening of Vatican II.    Just a coincidence?

Well, probably, but there’s something interesting about this coincidence. National Coming Out Day is a time to celebrate the “coming out” process for sexual and gender minorities: that coming to awareness, acceptance, and announcement of their true identities.

Five decades ago, the Catholic Church embarked on a project of pastoral and theological reform at the Second Vatican Council which was, in one respect, a coming out process:  an emergence from calcified traditions into a liberating recognition of its true identity. When Pope John XXIII announced the Council, he said he wanted to open some windows in the church.  In the process, it seems, he also opened some closet doors. 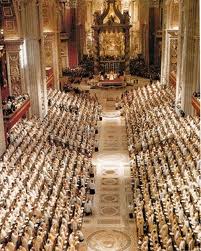 But the connection between these two celebrations is even more cohesive than the metaphors described above.  In one respect,  the movement for LGBT liberation, equality, and justice in the Catholic Church is a direct result of Vatican II.    The Council’s reform of theology, its updating of scriptural interpretations, its openness to scientific knowledge, its invitation for participation by the laity, its clarion call to work for justice in the world and the church–all these things were part of the 1960s Catholic zeitgeist which resulted in a burgeoning movement to be involved with, and work for justice for, LGBT people.

It’s no accident that both two of the oldest Catholic ministries to LGBT people–Dignity and New Ways Ministry–emerged from this era and as a direct result of priests and religious following the call of Vatican II.  Similarly, it would have been unimaginable that John McNeill’s theological groundbreaking work, The Church and the Homosexual, could have been written before the Council.

And let’s not forget the important contributions of liberation and feminist theologies which flowered because of Vatican II, both of which have had a direct positive impact on the Catholic LGBT movement.

Although Vatican II’s documents do not mention homosexuality or transgender topics at all, the spirit of justice and human dignity which infused those texts have had a tremendous effect on why so many Catholics are passionate about working for LGBT equality.  We are finally seeing the fruits of Vatican II, as the generation that was raised in its wake are now in their maturity and speaking out for LGBT justice in the church and society.

As those LGBT people who have “come out” know, “coming out” is a continual process that keeps continuing long after everyone knows about your identity.  It’s the continual process of having the courage to stand for truth, dignity, and equality.  Let’s pray that on this 50th anniversary of Vatican II, the Catholic Church will continue its “coming out” process begun in 1962, and will learn to live up to its best principles and ideals.

Two Stories Beg the Question: What Would Jesus Do?New Organization of LGBT Students on Catholic Campuses Is Launched
Scroll to top
Loading Comments...
%d bloggers like this: