A unique and comprehensive series on a public radio program is exploring LGBT issues from a variety of faith traditions.

Interfaith Voices, hosted by Loretto Sister Maureen Fiedler, is offering “Gay in the Eyes of God:  How 12 Traditions View Gay and Lesbian People,”  a 12-part look at theology, spirituality, and lived reality of gay, lesbian, bisexual and transgender people and issues. 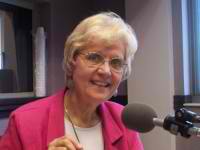 “Public opinion about homosexuality is changing rapidly, and civil law is not far behind. Gays and lesbians are increasingly open about their relationships and accepted. In some states, they now can marry legally and adopt children.

“But among those who are people of faith — with a few exceptions — gay men and lesbians wrestle with how to be faithful to their religious traditions while living fully the human reality in which they discover themselves. . . .

“This series offers much more than scriptural or theological conversations, although those are included. We hear the often poignant stories of gay and lesbian people struggling with who they are as they try to stay faithful to their respective traditions.”

Catholics are represented by four different people and perspectives: 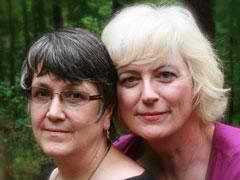 “When we deal with Catholicism, we hear the story of Hilary and Celestine Ranney-Howes. This couple was heterosexually married — one man and one woman. . .  [Hilary, who married as a man, came to understand her] true identity was female, and she became a transsexual woman. Normally, such a change would lead to divorce, but Hilary’s wife, Celestine, realized she loved the person, not the gender, so they stayed together as a lesbian couple. Today, they worship in an “intentional eucharistic community” in the Washington, D.C., area where they feel accepted. [Hilary and Celestine led a focus session at New Ways Ministry’s Seventh National Symposium in Baltimore this past March; some of their interview was conducted at that conference.]

“For our Catholic segment, I also interviewed Loretto Sr. Jeannine Gramick, a founder of New Ways Ministry, and Eve Tushnet, a young lesbian who believes she must remain celibate to be a faithful Catholic. Gramick explained the range of Catholic theological views on this subject, including the official view, and Tushnet said that she turned to works of Catholic mysticism for support in her lifestyle. Gramick noted that change is possible in Catholicism, but she does not expect it any time soon.”

The series also includes segments on evangelicalism (airing this week), the Black Church,Islam, Judaism, origins of the LGBT religious movement, Eastern religions, and other topics.

The series, which was made possible by a grant from the Arcus Foundation, began earlier this summer.  Each installment can be listened to on the radio show’s website.  Additional installments will be added to the archive as the series progresses.

Interfaith Voices is heard on 62 public radio stations across the nation, so check your local listings for when the program airs in your area.

Catholics Sing "For All the Children" and for Marriage EqualityCatholic Gay Leader is Forced Out of the Boy Scouts
Scroll to top
Loading Comments...
%d bloggers like this: