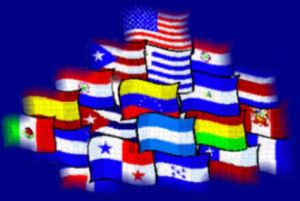 Catholics who support LGBT equality know only too well that the long-standing media image of Catholics as hostile to accepting LGBT people is blatantly false.   So, it may come as no surprise to them that a new survey shows that Hispanics, another population often whose LGBT attitudes are often depicted in similarly negative fashion, are actually very supportive of equality and justice.

According to a Seattle Times article, the report conducted by Social Science Research Solutions (SSRS) research group and  the National Council of La Raza, a major Hispanic advocacy organization

“found Latino support for many pro-gay policies at least on par with that of the population as a whole.

“Latinos in the SSRS study, for example, support same-sex marriage at a rate of 54 percent, compared with 53 percent of those in the general population who indicated such support in a Gallup poll last year. [Note: in most polls on marriage equality that track religious affiliation, about 50-55% of Catholics usually indicate support.]

“And by even wider margins, respondents in the SSRS study favor policies aimed at protecting gays against hate crimes and discrimination related to jobs, housing and military service.”

The Times article highlights the fact that this new information dispels old myths about Hispanic people:

” ‘There is a clear misperception among the general population about where Latinos stand’ on lesbian, gay, bisexual and transgender issues, said David Dutwin, vice president of SSRS and author of the report.

” ‘In reality, as society is evolving on LGBT issues and becoming more accepting of this community, so too are Hispanics.’ “

When Catholic Hispanics are looked at separately in the report, support for LGBT issues is even stronger:

“Three out of five Hispanics in the U.S. identify as Catholic. And while polls put support for same-sex marriage among lay Catholics at around 56 percent, church teachings and most church leaders oppose same-sex marriage.

“Among Catholic Latinos in the SSRS survey, 57 percent said they support same-sex marriage, while support among other Christians was around 43 percent.”

Interestingly, the researchers themselves admit that they expected to find Catholicism fueling anti-LGBT sentiment among Hispanics, but in fact, that hypothesis did not prove true.   In an interview with Candace Chellew-Hodge for an article on ReligionDispatches.org, Dutwin, the lead researcher confessed:

“With somewhere between three out of five Hispanics identifying as Catholic there was a thought walking into the survey that if there is a lack of support and acceptance in the Hispanic community, then it’s the Catholic nature of the community that’s driving it. Turns out that’s not the case at all. A majority Catholic Hispanics support legal gay marriage. It’s actually Protestant Hispanics that are under 50% support of gay marriage.

My own belief about strong Catholic support for marriage equality is that one reason it is so strong is because Catholics maintain strong family ties.   Since Hispanic culture is also very centered on the family unit, I speculate that this reason may be one of the motivators for such strong support among this group, too.

You can read the full text of the SSRS report and data by clicking here.