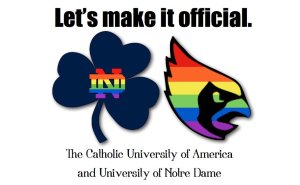 Two of the country’s most visible Catholic colleges–the University of Notre Dame and The Catholic University of America–have joined forces to work towards getting official recognition for a gay-straight alliance on each campus.

Notre Dame’s Alex Coccia and Catholic’s Ryan Fecteau, leaders on their respective campuses, issued a joint statement on February 21st on behalf of  Notre Dame’s 4 to 5 Movement and Catholic U’s CUAllies.  They announced that the two schools

“stand in solidarity as they move forward with gay-straight alliance proposals. Together, they share one message: ‘Let’s make it official.’ “

The statement offers stark statistics for why institutional support and recognition are needed:

‘Now more than ever before, the gravity of gay-straight alliances on college campuses is unequivocal. Among 15 to 24-year-olds, suicide remains the third leading cause of death (National Adolescent Health Information 2006). In addition, suicide stands as the second leading cause of death on college campuses (CDC 2008). An overwhelming 86.2% of LGBT students experienced harassment at school (GLSEN National School Climate Survey). Tragic stories of discrimination, harassment, and suicide run weekly on front pages and evening newscasts. The University of Notre Dame and The Catholic University of America face these same troubles.”

The statement grounds the call for gay-straight alliances on clear Catholic teaching:

“While both universities incorporate a Catholic mission and tradition, this coalition believes that a gay-straight alliance fits hand-in-hand with Catholic principles. Both universities can remain grounded in their faith and at the same time offer protection and acceptance for LGBT students. More than half of Catholic universities and colleges in the United States agree and have instituted LGBT student groups. This includes DePaul University, the largest Catholic university in the country. An important testament to the Catholic identity of these universities would be the recognition of gay-straight alliances focused on embodying a necessary spirit of inclusion in accordance with the Catholic Church’s social teaching of universal acceptance, and addressing aversive homophobia towards gay, lesbian, bisexual, transgender and questioning persons and their Allies.”

Last week, the Student Senate at the University of Notre Dame passed a resolution in support of a gay-straight alliance on campus, with 21 students voting in favor, none opposed, and two abstaining.  The Observer, the campus student newspaper reported that:

“Joanna Whitfield, vice president of the Progressive Student Alliance, said after the meeting she was glad Senate took time to discuss the resolution and the effects it would have on the student body.

” ‘I think that this resolution affirms that Notre Dame really is inclusive to all its students,’ Whitfield said. ‘Students really want to further inclusion and they really want to help out GLBT students on this campus … We’re also really happy that it’s the Student Senate, so it does show that the students really do support this movement.’ “

On CUA’s campus, student leader Fecteau sent a February 10th letter to Catholic University’s president, John Garvey, requesting official recognition for a gay-straight alliance, in which he summed up what such a group can do for college students:

Individually. each campus had been doing great work towards gay-straight alliance recognition, under the highly effective leadership of both Coccia and Fecteau.  Working together, their call for such recognition becomes all the more powerful.  This model of working together is one that could be replicated not only on college campuses, but in parishes that seek to develop ministry programs for LGBT people.