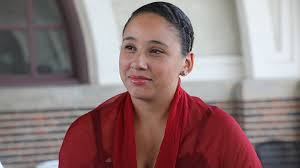 In a summer when uncivil behavior seems to accost us from all sides, 24-year-old Mia Irizarry has captivated Chicago with her self-assurance, calm, and patience in the face of some of the worst of it.  Last month Irizarry rented a picnic pavilion in a forest preserve near Chicago for a birthday party.  Shortly after she arrived, an apparently drunk, white, 62-year-old Timothy Trybus wandered in and began to harangue her about her Puerto Rico shirt.  Trybus swore at Irizarry, declaring that she “should not be wearing that shirt in America.”

Irizarry tried patiently, multiple times, to enlist the help of nearby white Forest Preserve Police officer Patrick O’Connor, who did not intervene when Trybus approached her threateningly but objected when a man who was helping Irizarry prepare the party moved toward Trybus briefly.  All in all it took over 35 minutes for further police officers to arrive, for Irizarry to make her case, and for the incident to be resolved.

In her video of the event (more on that below) Irizarry’s gracious civility is appealing, even inspiring. It’s a great reminder that (to use a cliché) we don’t always have to fight fire with fire.  Or as, as Michelle Obama said, “when they go low, we go high.”  And for Irizarry it succeeded:  as of early this month O’Connor had resigned and Trybus had been charged with a hate crime.

To be sure, civility is not always benign.   People like Trybus enjoy exploiting their status to demand civility of others while behaving uncivilly themselves.  Irizarry knew that, and she most likely recorded the exchange so that she could demonstrate her own innocence.  For people with little social power, acting cool under stress is often as much a strategy of self-preservation as a sign of hospitality:   when someone else has power of privilege, and you are outnumbered, whatever you do, don’t escalate the situation.  Most LGBTQ folk have been in a similar positions of forced civility.  Many are there every day.

Bishop Zubik with young adults at Theology on Tap

Still, the demand to be civil is quite different when a person with clout not only directs it to others in power but applies it to himself. That’s what’s so notable about Pittsburgh bishop David Zubik’s recent article in America magazine, “9 Rules for Civility from the Catholic Tradition.”  Interfaith and ecumenical dialogue have taught him, he says, that “we can disagree on profound theological and social issues but love what we see in each other’s hearts.”  In the face of rampant incivility, “we each have a responsibility to change the game, to treat each other better, particularly when we disagree.”

“The starting principle,” says Zubik, is as basic as it can be:  “every human being has God-given dignity and is worthy of respect.”   His nine rules follow logically:  Truly listen.  Assume the other person is genuinely seeking the common good, look for some common ground, and start there. Don’t try to erase disagreement; society is made of contending groups.  Respect the other, and persuade respectfully. Be especially sensitive to people from marginalized groups.  Never confuse facts and opinions.  Don’t shrink from standing up for your values, but present them in language that engages rather than threatens your listener’s concerns.  Never assume or impugn motives.  And always be self-critical.

Zubik wants everyone to adopt these practices consistently in intramural Catholic debates over everything from whether to give a dispensation from the rule of abstinence from meat when St. Patrick’s Day falls on a Lenten Friday to how the church should respond to same-sex marriage.

He is under no illusion that civility will vaporize all disputes.  For one thing, he thinks it would be too bad if we all agreed, all the time.  For another, as Valerie Schultz (mother of a lesbian daughter) wrote in America earlier this past spring, trolls abound.  They uncivilly attack fellow citizens who wear Puerto Rico shirts, priests who reach out to the LGBTQ community, and even mothers who persist in volunteering in their parishes after their daughters come out.  We will have endless opportunities to respond to this sort of incivility graciously.

For Zubik, as for Schultz, the primary point is not to win arguments but to create an ethos of respect and love.  Imagine what the church and civil society would be like if all of us, top to bottom and left to right, embraced the bishop’s words:

“We must be bridge builders who call the diverse members of our society to common ground, with shared values focused on the common good.

“After all is said and done, isn’t that what it means to live the Gospel? Jesus showed us how to listen. He knew how to change hearts. Let’s all pray to do the same.”