Today is the fourth anniversary of Pope Francis’ election, a moment for taking stock of what he has accomplished, is doing, and hopes to achieve in his remaining years. Francis’ record on gender and sexuality issues is mixed, but his larger efforts to help the church more fully receive Vatican II and to reform the Curia may be better places for LGBT Catholics and their allies to focus.

Jesuit Fr. Thomas Reese, writing in the National Catholic Reporter, outlined what he sees as five of the pope’s great achievements. To progressives who are critical of the pontiff, Reese said Francis’ record is “revolutionary” and should be celebrated. Whether one agrees with that assessment or not, Reese’s points are worth highlighting with an eye on LGBT issues:

“First, the pope has called for a new way of evangelizing. He tells us that the first words of evangelization must be about the compassion and mercy of God, rather than a list of dogmas and rules that must be accepted. . .He does not obsess over rules and regulations. He is more interested in orthopraxis (how we live the faith) than orthodoxy (how we explain the faith).”

This new way of evangelizing has prioritized human beings as subjects before God, not categories or objects. In a 2016 interview, expounding on his famous “Who am I to judge?” remark, Francis spoke about gay people with a welcoming tone and without any mention of condemnatory sexual ethics. This approach seems to have worked, at least initially. The pope received a “Person of the Year” award from not only Time, but from The Advocate, and various celebrities like Edie Windsor, Antonio Banderas, and Elton John have applauded him for his focus on mercy, not law. 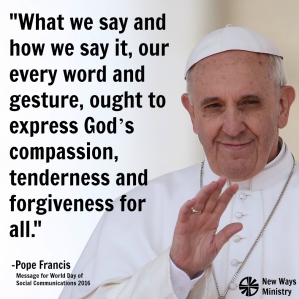 Reviews of Pope Francis in the church have likewise been fairly positive. Some 50 LGBT Catholics and their families on pilgrimage with New Ways Ministry received VIP seating during a papal audience, a deeply healing and hopeful moment for many pilgrims and others. Francis met personally with a transgender man, Diego Neria Lejárraga, who had been excluded from his parish in Spain. Speaking about the meeting in a later interview, the pope described Neria Lejárraga as “he who was she who is he” and used male pronouns. If human encounters lead to hearts broken open, as Sr. Simone Campbell told a Vatican gathering last week, then such interpersonal acts cannot be undervalued.

Reese’s second point is that the pope “is allowing open discussion and debate in the church. . . .It is impossible to exaggerate how extraordinary this is.” For context, he explained:

“Only during Vatican II was such a debate possible. . .During the last two papacies, dissent was roundly condemned and suppressed. The theologies of John Paul II and Benedict XVI could not be questioned. . .Under Francis, synodal participants were encouraged by the pope to speak their minds boldly and not worry about disagreeing with him. The result is a freer exchange of views, public disagreements, and even outright criticism of the pope by some conservative cardinals. All of this would never have been allowed under earlier popes.”

This new openness includes an end to investigations against and silencing of theologians, which Reese said “is extremely important if theology is to develop and deal with contemporary issues in a way that is understandable by people of the 21st century.” But what has not entered the conversation, either generally or at the Synod on the Family, are the voices of LGBT people and their families who must inform theology and ministry by speaking about their lives and realities.

Welcoming disagreement, and even playing with his own ideas in public, is a sign of health in the papacy. But it has led to consternation from many parts of the church. Precisely what Francis means in an interview or off-the-cuff remark is not always clear. This phenomenon has created problems, like misreporting that he had compared transgender people to nuclear weapons or speculation with little factual basis. Perhaps most notable was the mix up about Pope Francis alleged meeting with right-wing icon Kim Davis during his visit to the United States. 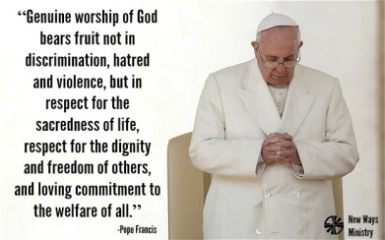 Politically, Pope Francis has had less tolerance for diversity of opinion. He has repeated denunciations against marriage equality (e.g., in Slovakia, Slovenia, Philippines), even saying there was a “world war to destroy marriage.” Moreover, he has remained silent about efforts to criminalize and discriminate against LGBT people, even as Catholics ask him to speak in defense of human rights. His decision to be involved in the marriage debate but not the issue of criminalization shows poor prioritization for a pope who promotes human rights.

Third, Reese identified Francis as “presenting a new way of thinking about moral issues in Chapter 8 of Amoris Laetitia,” which promotes a richer and more mature understanding of ethical living:

“Under this approach to moral theology, it is possible to see holiness and grace in the lives of imperfect people, even those in irregular marriages. Rather than seeing the world as divided between the good and the bad, we are all seen as wounded sinners for whom the church serves as a field hospital where the Eucharist is food for the wounded rather than a reward for the perfect. Gone is any attempt to scare people into being good.” 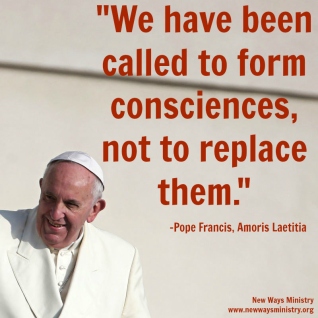 Amoris Laetitia was a positive step for the church generally but provided less joy for LGBT Catholics and their families. Indeed, theologians have noted how its treatment of sexuality does not seem consistent with the rest of the exhortation. The disappointment of gender and sexual minorities was present throughout the Synod on the Family process which, despite some positive moments, largely set aside homosexuality and related concerns.

Fourth, Reese noted the pope’s prominent commitment to environmental justice. This has included the release of the encyclical Laudato Si, which was warmly received though raised questions for LGBT advocates based on ambiguous language about gender identity. Failure to clarify in this encyclical and in other remarks what he means by “ideological colonization” or unspecified critiques of gender theory have given LGBT-negative bishops leeway to be condemnatory.

Finally, Reese wrote that Francis “has moved to reform the governance structures of the church.” Reese evaluated this work as slow but in progress. These efforts have included appointing more pastorally-oriented bishops who are less interested in sexual issues, whom he described as not crusaders but “humble and trusting sowers of truth.” And he received Bishop Jacques Gaillot who, in 1995, was removed from office for blessing the union of a same-gender couple.

So what happens now? I offer three brief points of my own for how we can understand and evaluate Pope Francis today. 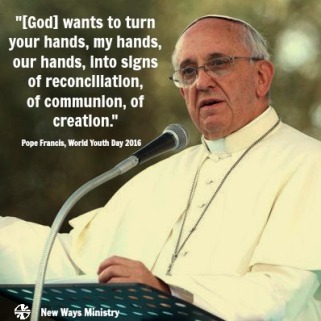 First, when evaluating anything Pope Francis says or does, his commitment to enfleshing Vatican II must be kept in mind. This effort is his fundamental project, one which was set aside by his two predecessors, but one which will be explosive long term if it continues.

Second, Francis possesses a basic understanding that LGBT people are marginalized, and acknowledged the need for pastoral accompaniment of LGBT people as “what Jesus would do.” Yayo Grassi, a gay former student of the pope who  has remained friends with Francis, said at a New Ways Ministry event last fall that Francis has said to him explicitly, “There is no place for homophobia” in ministry. These are building blocks from which greater inclusion and justice can arise.

Third, Pope Francis will likely not move beyond his limitations as an older cleric raised in a traditional Argentinian culture when it comes to questions of gender and sexuality. This reality means we cannot hesitate to get on with our own work. Change in the church comes from below. Australian Catholics seized on the pope’s call for the church to apologize to LGBT people by holding a liturgy for such an apology. As I have written previously, we must do likewise in using the room Francis has created to work for equality where, when, and how we are able.

As we evaluate Pope Francis today and going forward, we must not miss the forest for the trees. This papacy has been about God’s expansive mercy, and Francis has involved himself in the causes of many vulnerable peoples. He is witnessing to the Gospel in bold and beautiful ways, even if imperfectly.

To read “What the People of God Would Say to Pope Francis” based on comments from Bondings 2.0 readers, click here. For our full coverage of this papacy, see the “Pope Francis” category to the right or click here. And here are more articles that may be of interest:

Transfigured From a Life of Loneliness and Disconnection Vancouver Archbishop Objects to Franklin Graham’s Anti-LGBT Presence
%d bloggers like this:
Scroll to top