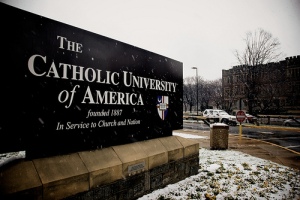 When Cardinal George apologized for his insensitive comments comparing the LGBT rights movement to the Ku Klux Klan, the reaction was mostly favorable.

Students at the Catholic University of America, however, believe that the apology was not enough.  When Cardinal George visited their campus on January 12th to speak at a conference on the Second Vatican Council, a group of students who want him to do more stood and prayed outside the building where he was speaking and handed out flyers calling on the cardinal to do more than apologize.  The Tower, Catholic University’s student newspaper reprinted the students’ statement which reads in part:

“While we understand Cardinal George released an apologetic statement, we find this action passive and inadequate. Comparisons of a peaceful social movement rooted in a desire for equality under the law to the notoriously hateful KKK rooted in mob violence, bigotry, and the worst of American history are utterly inappropriate.

“Our presence this evening is our witness as people of good will to call on Cardinal George and the Catholic Church at large to dialogue with pure intention and total charity with the gay and lesbian community. “

Students at Catholic University were not the only ones to respond to Cardinal George’s comments.  At St Norbert College, DePere, Wisconsin, a petition was circulated calling on the school’s administration to rescind an invitation to Cardinal George to be the commencement speaker in May.  Thomas Kunkel, the college’s president, has announced that he will not rescind the invitation, and that Cardinal George will indeed be the speaker.

New Ways Ministry has already suggested that the cardinal not only to open dialogue with LGBT Catholics but to make a public gesture of welcome and reconciliation by passing out water to parade marchers on Gay Pride Day in Chicago.  Actions speak louder than words.