The Oil of Gladness 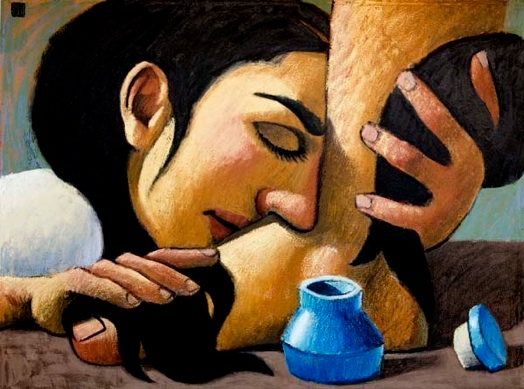 In the Gospel story of the woman who anoints Jesus’ feet (Luke 7:36-50), two characters are pitched against each other: Simon, the Pharisee, and a woman of low reputation.

As a Pharisee, Simon likely had acquired serious theological acumen and a mastery of scripture. He would have exercised rigorous self-discipline and tithed meticulously. His time “serving” God  was probably validated by the respect he received as a godly man. Yet he did not “love” God. His hospitality was cavalier and his appraisal of Jesus contemptuous.

By contrast, the woman was nameless, weighted with sin and pronounced of low repute. Yet she emerges as a model of extravagant worship.

Read on to discover how a sinner’s repentance becomes her saving oil of gladness.

36 One of the Pharisees invited Jesus to dinner. Jesus went to his house and reclined at table. 37 A woman who had a low reputation in that town came to the house. She had learned that Jesus was dining with the Pharisee, so she brought with her an alabaster jar of perfumed oil. 38 She stood beside Jesus, crying, and her tears fell to his feet. Then she dried his feet with her hair, kissed them, and anointed them with the oil.

39 When the Pharisee saw this, he said to himself, “If this man were a prophet, he would have known who this woman is who is touching him, and what a low reputation she has. 40 In answer to the Pharisee’s thoughts Jesus said, “Simon, I have something to say to you.” Simon answered, “Say it, Teacher.”

41 “A certain moneylender had two debtors. One owed five hundred denarii, and the other fifty. 42 When they could not pay, the moneylender cancelled both debts. Now which of them was more grateful? 43 Simon answered, “I suppose the one who owed more.” Jesus said, “You are right.”

44 Turning to the woman, he said to Simon, “Do you see this woman? I entered your house; you gave me no water to wash my feet, but she has washed them with her tears and wiped them with her hair. 45 You gave me no kiss of greeting, but she covered my feet with kisses. 46 You did not anoint my head with oil, but she has anointed my feet with oil. 47 Therefore I tell you, her sins, which are many, are forgiven – for see how much she loves. But the one who is forgiven little, loves little.”

48 The Jesus said to the woman, “Your sins are forgiven.”

49 Those who were also at table began to say among themselves, “Who is this, who even forgives sins?” 50 Meanwhile, Jesus said to her, “Your faith has saved you; go in peace.”

Merciful God, you forgave a sinner and made her an example of humility and extravagant love. You raised up her human body, alleged of sin, and deemed it worthy to bless you. By allowing her to anoint you, you ordained her a priest in the company of men.

Continue to lift up our LGBTQ family for even though we may be deemed of “low repute” in the eyes of many, we know that we have a place by your side. Through our extravagant love and anointing oils may we draw others to you so more may experience your healing mercy and leave your presence with the faith that saves.

Singing “Alabaster Box,” McCloud, an American dance and Rhythm & Blues singer, pours her love on Jesus like oil from a broken alabaster jar.