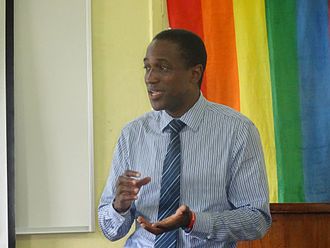 Today’s post is by Maurice Tomlinson, a Jamaican attorney-at-law and senior policy analyst with the Canadian HIV/AIDS Legal Network. At the Legal Network, Maurice acts as counsel and/or claimant in cases challenging anti-gay laws before the most senior tribunals in the Caribbean, authors reports to regional and UN agencies on the human rights situation for LGBTI people in this region, conducts judicial and police LGBTI- and HIV-sensitization trainings, and facilitates human rights documentation and advocacy capacity-building exercises. In 2017 Maurice organized the first-ever global conference in Jamaica on the role of the church (past, present and future) in the decriminalization of sodomy.

His essay is a response to an op-ed written by a Catholic deacon for The Jamaica Gleaner, the leading newspaper in Jamaica.

As a Christian I always cringe when I read articles concerning LGBT people by Peter Espeut, a Jamaican Roman Catholic deacon and sociologist.  As an office-holder in a church ostensibly built on the “rock” (or “Peter” in Latin) of Christ’s example and command to reach those on the margins of society, this modern Peter’s writings display a dangerous hostility towards vulnerable LGBT people.

In his latest tirade (“Ginnalship and the gay agenda,” Jamaica Gleaner, April 27, 2018 available at: http://jamaica-gleaner.com/article/commentary/20180427/peter-espeut-ginnalship-and-gay-agenda#.WuSSmoe28JA) Espeut argues that it is premature to celebrate the Belize and Trinidad court decisions that struck down those countries’ anti-sodomy laws.  Peter also resorted to calling Jamaican gays and their allies “ginnals” or con artists because they want the 1864 British colonially-imposed anti-sodomy law amended in order to punish the anal rape of boys (now a maximum of 10 years under the anti-sodomy law) with the same severity as the vaginal rape of girls (which is up to life imprisonment). To Peter, this request is not about “protecting” boys but pushing a devious gay agenda.

A quirk in the Jamaican constitution “saves” all pre-independence laws, such as the anti-sodomy statute, from constitutional review once they remain unchanged.  So, even if the subject law violates a host of human rights, such as privacy, only Parliament can strike it down.  This obviously undermines the court’s function as guardian of the Constitution to interpret the validity of laws.

While I make no claims as to whether equalizing the punishment for all rapes will protect boys, I would remind Peter about Christ’s injunction to take the plank out of one’s own eye before attempting to dislodge the speck from the eyes of another.  The moral authority of the Catholic Church to speak about protecting children is certainly tainted in light of the legion of pedophile priests who the church protected for centuries.

But, Peter was not content to stray into a questionable moral discourse, he also believes that as a sociologist he can confidently opine on legal interpretation as well!  As is often the case, a little knowledge is a dangerous thing. As a lawyer and law lecturer I would therefore like to clarify some of the finer legal points for Deacon Espeut.

First, following the withdrawal of the Belize Catholic church from the court case (thanks in part to the installation of a more humane and pastoral bishop) the government was the only party left to appeal the historic decision to strike down the anti-sodomy law.  The government had initially accepted the Chief Justice’s ruling that the statute violates the constitution.  However, after pressure from powerful anti-gay religious organizations the government decided to appeal only one issue, whether the definition of “sex” in the constitution’s non-discrimination clause also included “sexual orientation.”  This interpretation will not affect the repeal of the law as there is no question that it unjustly infringes several other constitutional rights.

And as for the Trinidad decision, LGBT people and allies across the region anticipated and are quite prepared for the matter to be appealed.  This is because a first instance decision will have less persuasive value than one from an apex court. So, hopefully this matter will quickly be taken up by Trinidad’s final appellate body, the UK Privy Council, which, coincidentally,  is also the final court for several Caribbean countries with anti-sodomy laws, including  Jamaica.  In the Jamaican case of Lambert Waton v the Queen [2004] UKPC, the Privy Council said that savings law clauses must be narrowly interpreted while constitutional rights must be liberally construed.  There is therefore great anticipation that the Trinidad decision will accelerate the end of anti-sodomy laws in the nine other Anglophone Caribbean countries that still have them.

Finally, Deacon Espeut believes that Jamaica’s anti-sodomy law is completely shielded by the savings law clause because, to him, the statute was never changed.  However, what he fails to appreciate is that the 2012 Sexual Offences Act, introduced a new requirement that persons convicted under the anti-sodomy law must now register as sex offenders.  And in some jurisdictions courts have found that sex offender registration amounts to punishment and therefore a change in the law.  This would ostensibly make the savings law clause inoperative and open the anti-sodomy law to constitutional review.

Time will tell how the Jamaican courts will rule on our anti-sodomy law, but as the Prime Minister recently acknowledged, the country is changing and becoming more tolerant of the human rights for LGBT people.  Archaic and hateful anti-gay laws will eventually disappear as they are built on the sinking sand of unjust discrimination, not the solid rock of human rights.

LGBT Catholics Ask British Bishops to Educate Themselves on Gender