A top cardinal has endorsed the idea that the church support all families, including those not considered traditional by the Magisterium’s standard. 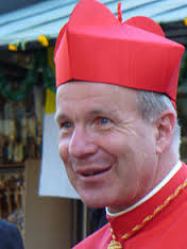 Cardinal Christoph Schönborn of Vienna made his remarks while attending a conference in Ireland entitled, “Let’s Talk Family: Let’s Be Family.” He told journalists, per The Catholic Herald:

“Favouring the family does not mean disfavouring other forms of life – even those living in a same-sex partnership need their families. . .[Family is] the survival network of the future [and] will remain forever the basis of every society.”

Before the conference held in the city of Limerick, Schönborn addressed the idea of family as it relates specifically to Ireland, reported The Independent:

“‘Ireland is synonymous with family, a country that traditionally has had family at its core. . Second unions, divorce, same-sex unions; these are all part of a new narrative around the family in Ireland. So there is a lot of change and the church must show mercy in the context of that change. It must be willing to meet families where they are today.

“‘Ultimately, and this is certainly the case with Ireland, for all the crises in the institution of marriage the desire to marry and form a family remains vibrant, especially among young people.'”

Schönborn added that “the weakening of family” threatens society and, as such, “Reinvigorating family is perhaps our great mission today.”

Schönborn’s comments are grounded in his understanding of moral theology. He expounded on this topic during his Irish visit, and Crux quoted the cardinal as saying, “Moral theology stands on two feet: Principles, and then the prudential steps to apply them to reality.” The report continued:

“The problem, he said, was that conscience came often to be seen merely as “the transposition of the Church’s teaching into acts” but in fact “the work of conscience is to discover that God’s law is not a foreign law imposed on me but the discovery that God’s will for me is what is best for me. But this must be an interior discovery.”

“He was ‘deeply moved’ when he read the famous paragraph 37 of Amoris, which complains that too often the Church fails to make room for the consciences of the faithful, and that the task of the Church is to ‘form consciences, not replace them.’

That meant understanding that people operated within constraints. . .’The bonum possibile in moral theology is an important concept that has been so often neglected,’ said Schönborn, adding: ‘What is the possible good that a person or a couple can achieve in difficult circumstances?'”

Grounding his remarks in Pope Francis’ apostolic exhortation Amoris Laetitia, the cardinal summarized the document’s message as “marriage and family are possible today,” and said it was noteworthy that even when “everybody can get married. . .so many choose not to get married.”

About pastoral care to families, Schönborn said the reception of Amoris Laetitia is “a long process.” He criticized both rigorists and laxists “who have rapid, clear answers.” Accompaniment, the cardinal said citing St. Gregory the Great, “is an art and it needs training.” Indeed, he admitted the Synod on the Family and Amoris Laetitia were not a set of rules that would be applicable in all cases.

What is refreshing about Cardinal Schönborn’s remarks in Ireland is his willingness to admit reality, and then do theology from it amid life’s messiness rather than dictate from idealized models. Being the child of divorced parents likely helps his more merciful understanding of so-called irregular families. His desire to seek the good that is possible in all situations, including same-gender relationships, is too rare among church leaders.

Schönborn’s visit comes a year before Ireland hosts the 2018 World Meeting of Families, which could be accompanied by a papal visit. There may be no more fitting backdrop for the Catholic Church to consider family than Irish society, given its rapid changes, but this will only be true if church leaders are honest about the realities around them.

Hopefully, the next World Meeting of Families takes up Schönborn’s approach, and focuses on how the church can support all families instead of just those which fit the strict parameters of the Magisterium.

QUOTE TO NOTE: ‘People should be called the way that they want to be...“Land O’Lakes” Statement Paved Way for LGBT Welcome in Catholic...
Scroll to top
Loading Comments...
%d bloggers like this: