When Orlando, Florida newspaper columnist Justin Mitchell visited the Pulse Nightclub memorial this past June, it stirred him to remember the 49 victims who were killed there. It also stirred him to reflect on how gay nightclubs and churches can be quite similar spaces. 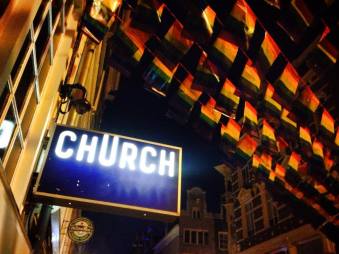 Mitchell, writing in the Sun Herald, described his journey as a gay man who was raised Catholic. There were positive moments in youth group when church elevated him in prayer, and there was also “the moment I fell out of love with mass” as pastors criticized marriage equality. There was the progressive church in college that welcomed him, and then the rejection by a former parishioner in his hometown. All of this came back to Mitchell as he watched prayer candles burn at the Pulse memorial. He reflected:

“The point of all of this, though, is that I lit that prayer candle and was brought back to my days in church. Because what many don’t realize is that a gay bar is exactly like church in many ways for the LGBTQ+ community. They both are safe spaces where its members can let go and be vulnerable. They can share their most suppressed feelings, whether it’s holding a man’s hand or praying to the man upstairs. It’s a place where, above all, you don’t feel like anything bad is going to happen to you.”

Many people around the world remembered the Pulse anniversary last month. Catholics lamented one bishop’s decree released on that very day which bans married lesbian and gay people from the most important aspects of church life.

As we move forward, these violations (and others that come to mind) of safe and sacred places are our propellants to work even harder so that there will be places like clubs and churches where all are welcome to be who they are.