As we reported in yesterday’s Bondings 2.0 post, Bishop Thomas Paprocki of Springfield, Illinois, has issued a wide-ranging decree barring lesbian and gay couples in civil marriages from communion, pastoral leadership, being granted funerals, among other things.  The following is an open letter to Bishop Paprocki in response to that decree from New Ways Ministry’s Executive Director Francis DeBernardo.

New Ways Ministry recommends you to send your own letter to Bishop Paprocki, and we encourage you to communicate honestly, personally, and civilly with him.

Your “Decree Regarding Same-Sex ‘Marriage’ and Related Pastoral Issues” has been received by Catholics across the nation with one of the strongest negative reactions that I have witnessed in almost 25 years of ministry with the LGBT community in the Church.

While there have been many harsh and negative statements from church leaders over the past quarter century, I think the reason that people responded so emotionally to your edict is that it addresses two very core Catholic areas:  sacramental experience and life/death issues. 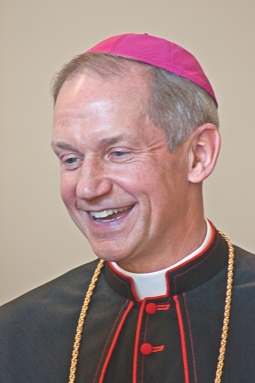 Of all the responses that I have heard and read in just the last day–and they have been numerous–the directives you issued which have wounded people most deeply are your prohibition of communion reception by married lesbian and gay people, and your denial of funeral services to the same group.  Catholics just do not understand how such regulations correlate with a Church that preaches love and inclusion.

Most Catholics are well aware that you do not support civil marriage for lesbian and gay people and respect the legal right of Churches not to marry such couples. But Catholics do not understand how this one area of disagreement can lead to such draconian measures of exclusion–especially at times of death, loss, and grief.

Despite whatever good intentions may have motivated you to issue these regulations, you need to know they will, in fact, do no pastoral good, and they will wreak much pastoral harm.  You have not singled out any other group for such negative pastoral treatment.  It seems as if you consider civil same-sex marriage to be the ultimate sin, beyond the pale of any of the countless ways that human beings do not follow church teaching.

Regardless of whatever doctrines you think you are enforcing, the effect of such enforcement will be that more and more Catholics–gay, lesbian, heterosexual, bisexual, transgender, and all in-between–will leave the Church because of the negative images of LGBT people and the Catholic Church that you have communicated.  And many will never return.

What’s more, the negative messages that you sent will be heard by many young people (and some who are not so young) who are struggling with their sexual and gender identities.  They will interpret this message as one more piece of evidence that the Church and God do not love them.  That message will move them many steps closer to psychological harm, self-destructive behaviors and tragically, for some, suicide.

Many gay and lesbian couples are leading lives of heroic devotion to each other, their children, and their communities.  Many, too, are leading lives of struggles and stumbles, where they are seeking support from churches.  Those couples who are Catholic seek nourishment for their spiritual and human journeys.  They seek a community where they can share and develop their faith through education, relationship, service, and ritual. They seek Eucharist.

Catholics, who are often very aware of how their lives in many ways do not conform to ideals that the church has presented them, are ready and eager to welcome these lesbian and gay couples into their communities and their hearts.  No Catholic, not even the pope who famously offered the primary definition of himself as a “sinner,” is perfect.  All fall short.  All depend on grace.  The many who seek grace through membership and participation in the Catholic Church should not be denied God’s free gift.

I hope and pray that you will reflect not only on the harm that this decree will cause but also the good that can occur if you withdraw it.  Please welcome lesbian and gay families back into the Springfield Diocese’s Catholic parishes.

Bishop: Pastors Must Deny Funerals to Catholics in Same-Gender MarriagesCatholics Angered by Bishop’s Attempt to Exclude Lesbian and Gay Coup...
Scroll to top
Loading Comments...
%d bloggers like this: