In the Mediterranean island-nation of Malta, a potential controversy about the use of a rainbow flag at a prayer service has been diminished by the pastoral admonition of the local chancery and the graciousness of the leader of the group which was hosting the service.

The Times of Malta reported: 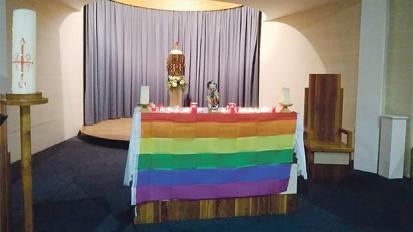 The rainbow flag at the altar in the university chapel.

“The altar decorated with a rainbow flag at a prayer vigil at the University of Malta chapel has stirred up a hornet’s nest, but the Catholic LGBT group of behind it is insisting that their only intention was to convey a message against discrimination.

“Organised by Drachma [Malta’s LGBT Christian organization] on May 17, the religious event was meant to mark the International Day Against Homophobia, Transphobia and Biphobia.

“However, eyebrows were raised when organiser Chris Vella upload a photo of the university chapel altar wrapped in a rainbow flag on his Facebook account amid criticism that this went too far.”

A conservative Catholic watchdog group from North America saw the photo and publicized the use of the rainbow flag, calling it “sacreligious.”

A diocesan spokesperson in Malta, however, remained calm and viewed the incident not as an opportunity to make anti-LGBT remarks, but to reiterate regulations from the Roman Missal concerning the decoration of an altar.  The Times reported that the Missal states:

” ‘. . . out of reverence for the celebration of the memorial of the Lord and for the banquet in which the Body and Blood of the Lord are offered, there should be, on an altar where this is celebrated, at least one cloth, white in colour, whose shape, size and decoration are in keeping with the altar’s structure.’

“Furthermore, it states that ‘moderation should be observed in the decoration of the altar.’ These rules also make it clear only Mass-related items should be placed on the altar, apart from a ‘discreetly’ arranged mechanism to amplify the priest’s voice.

“Asked whether the Church condoned the use of the rainbow flag or any other symbol, the spokesman invited the faithful to be aware of and adhere to the liturgical instructions.

Vella, the Drachma leader, also responded civilly by noting that no offense was intended and that the liturgical regulations were not known to the group.  The Times quoted him:

“. . . Mr Vella said that he was not aware of such regulations. However, he said he had no qualms about refraining from using the rainbow flag in future if ordered to do so by the ecclesiastical authorities. Nonetheless, he refuted criticism of the use of the flag, insisting that no Mass had been celebrated.

” ‘We had no intention to convey a political statement. Our only intention was to put our prayers to God for all those suffering. Drachma was never about defying the Church or offending people… We did not want to fuel confrontation but to hold dialogue,’ Mr Vella insisted.”

So, despite the best efforts of a conservative Catholic group to sow seeds of enmity between the diocese and the LGBT group, the two sides brought this small controversy to an amicable close.

Moreover, Drachma used the occasion as a teachable moment to raise up both LGBT spirituality, as well as to highlight atrocities committed against LGBT people globally.  Lovin Malta reported on sections from Drachma’s press statement about the issue:

“It was only natural for us, this year, to place the rainbow flag around the altar, along with the statue of Our Lady, as we prayed especially for our brothers and sisters in Chechnya who are undergoing brutal persecution just for being gay.

“The rainbow colours of the flag symbolise the diversity that exists among God’s children and replace the colour pink as this is reminiscent of the six-pointed pink star that gay persons had to wear at Nazi concentration camps.”

“Unfortunately, discrimination and homophobia are still rampant in all countries, including Malta, as exemplified by the fact that a small number of persons seem to have taken objection to the use of the rainbow flag in the chapel during this said vigil. It is, indeed, ironic and sad that the persecution, electrocution, arrest, public flogging and killing of gay persons in countries such as Chechnya, Nigeria and Indonesia goes unnoticed and is not even considered to be newsworthy, while such a simple and spontaneous gesture marking the International Day Against Homophobia (IDAHO) was interpreted as a sacrilegious action.”

Malta’s church officials may soon learn that the use of rainbow flags and vestments are not such an anomaly in churches around the world.  Many parishes that welcome LGBT people have displayed the rainbow colors as a sign of welcome.  One parish in Australia maintains rainbow banners in its church building year round.

It’s also not unheard of for various ethnic and cultural groups to decorate a sanctuary with symbols of their traditions for specific celebrations or prayer times.  Perhaps for next year’s prayer service, Drachma will find a way to display the rainbow flag in a way that will not violate any liturgical directives about how an altar table should look.