As another school year wraps up, students at Newman University, Wichita, Kansas,  are celebrating a new LGBTQ student group. Today’s post shares this story and an opposite one from The Catholic University of America, Washington, D.C.  Both stories highlight the importance of such groups. 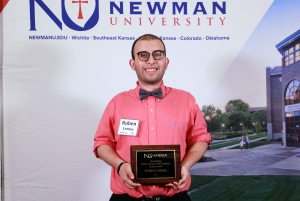 Ruben Lerma led efforts for a recognized group at the school, which he decided to attend because it offered him generous financial aid despite his lack of U.S. citizenship. But being gay, Lerma was skeptical of attending a Catholic institution. The Witchita Eagle reported:

These experiences propelled Lerma to make a public speech his junior year, acknowledging that he was not the only gay person on campus and, “If for their sake, if not mine, you should make [the campus] more amiable, make the environment better.”

Student interest in an LGBTQ group spread quickly, building on existing alumni support and a more general overhaul on campus about how the school handles diversity.

In response to this pressure, administrators formed a committee to figure out how the school could better support LGBTQ students like Lerma. The Eagle reported that the committee, “which included nuns, priests, students, faculty, and administrators,” is modeled on the University of Notre Dame’s pastoral plan for LGBT students.

“‘A kaleidoscope has all these different colors and shapes, but they somehow come together to make this really awesome picture and it’s beautiful even though it’s all different. . .That was important for us. We are LGBTQ, but we are different colors, different shapes and sizes, and it all looks great.'”

The plan, unfortunately, reveals the compromises which LGBTQ students are often required to make in more conservative Catholic environments. The Eagle reported:

“The Notre Dame-type model included language that emphasizes that the club cannot contradict the Catholic view that LGBTQ students should be ‘chaste,’ because sex is condoned only in marriage between a man and a woman.

“‘The University exhorts all to hear and live the Church’s teaching that ‘the deliberate use of the sexual faculty, for whatever reason, outside of marriage (between man and woman) is essentially contrary to its purpose’ and is considered gravely sinful,’ the plan reads.”

Dean of Student Affairs Levi Esses affirmed this mission, saying the group would be a “very supportive atmosphere” for students to remain celibate outside of heterosexual marriage. Nonetheless, students are celebrating the plan even with its compromises:

“Kevin Clack, who will be the group’s first student leader, said he doesn’t think the language in the pastoral plan means the group won’t be able to talk about dating and romance. But LGBTQ students have a lot of concerns, and Clack said he doesn’t expect the group to focus on sexuality more than any other group on campus, including the Black Student Union, of which he is also a member.

“Clack doesn’t agree with the language about what constitutes a true marriage but thinks compromise was necessary to get the group started.” 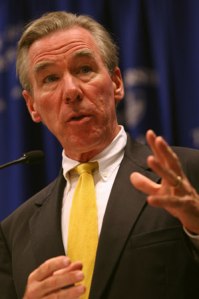 Speaking at a town hall with students, President John Garvey explained his rationale, according to campus newspaper The Tower:

“‘We’re not going to officially sponsor CUAllies. But that should not, I hope, be the measure of our support. . .We do not want to endorse a whole set of propositions that our culture insists on sexuality and gender. . .Neither do we want to ignore the needs of our gay and lesbian students. We ask all freshmen to take a pledge when coming here, we offer a counseling center, and Father Jude has a chaplet initiative.'”

Earlier this spring, the University hosted lesbian Catholic speaker Eve Tushnet who promotes celibacy for lesbian and gay people. In response, CUAllies President Carly Tomaine told The Tower “that in keeping with Tushnet’s message about inclusion, “[The university] needs to publicly acknowledge [CUAllies] because no one wants to be pushed to the side.”

Administrators have rejected student and alumni requests for CUAllies to be recognized since 2008, leading one alumnus to publish a post on Buzzfeed recently titled “Reasons Queer Youth Should Not Attend Catholic University of America.”

Student demands at both Newman University and Catholic University make clear the importance of recognized LGBTQ student groups that act both as safe spaces and campus educators. Thankfully, more often than not, we report on Catholic institutions which are recognizing, not rejecting such groups.